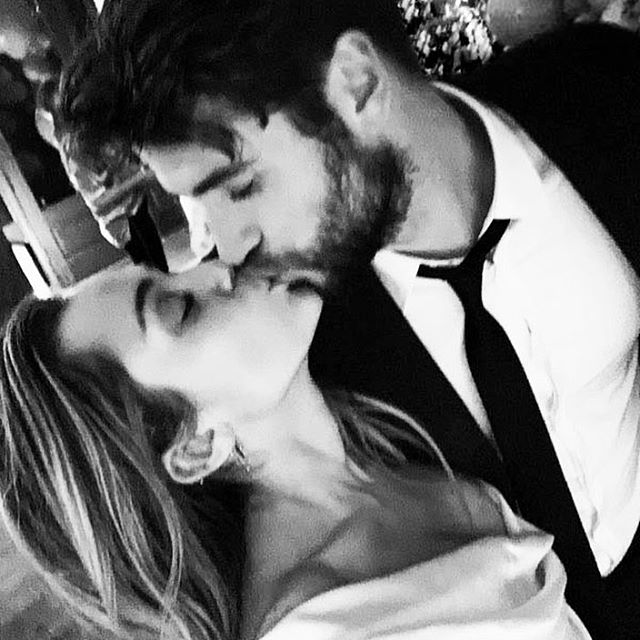 American singer and actress Miley Cyrus has officially got married to long time boyfriend Liam Hemsworth. The reports of their wedding had been doing the rounds since a long time but has now been officially confirmed by the singer. The 26 year old posted two adorable pictures from the intimate wedding held on December 26, 2018 on the social media accounts.

One of the pictures has shown Cyrus and 28 year old Hemsworth sharing a smooch while they are dressed in their best wedding attires. Miley can be seen wearing an off-shoulder floor length white gown while Liam can be seen in a black tuxedo. The other picture has shown the two in each other’s arms as they share a quiet moment together.

Miley captioned the pictures, “This is probably our one – millionth kiss.” Liam also shared the same pictures and wrote, “My love.”Some of the photos and videos were also posted on the Instagram Story of the couple’s surfer friend Conrad Jack Carr on December 23, 2018 that showed Hemsworth and his brothers Luke and Chris doing a shotski with Mr. and Mrs. Balloons in the background. Another picture had shown the newly-wed couple in front of a cake cupcakes with singer’s mother Tish also in the frame.

Meanwhile, the representatives of both the stars were not immediately available for a comment but it appears that Miley’s sisters Noah and Brandi were also a part of the party that was held at the couple’s residence in Franklin Tennessee. The Instagram stories of the girls had shown them posing together with Carr with Mrs. Balloons floating in the background. 18 year old Noah was seen in casuals in a black turtle neck and knit cap while 31 year old Brandi was seen in a glittery off-white top. Miley Cyrus and Hemsworth got married after going through a long on an off relationship. The couple dated for many years before he proposed in 2012 but had ended the engagement and broke up a year later.