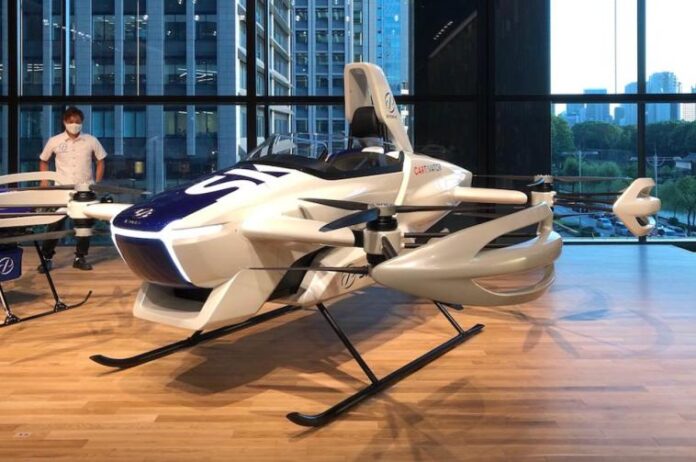 SkyDrive Inc. in Japan has come up and introduced its motorcycle that has propellers and it is a flying car that could make it to the skies in future. The company released a demo video of their machine which has shown a person sitting inside the car and taking off the ground to about 1 to 2 meters and had also managed to hover in the air at the Toyota Test Field for about four minutes.

Reports from the local media outlets have claimed that it is the first demonstration for a flying car in the history of Japan. The head of SkyDrive Tomohiro Fukuzawa has assured that the car could be made to reality and brought to work by 2023. Fukuzawa also expressed that making such a machine safe for public operation would be the most challenging part. The chief while talking to the reporters expressed that their project is one of the 100 flying car projects in the world and only a few of them have been able to succeed with a person sitting inside.

Fukuzawa added that more people would surely like to ride it and feel safe in it. For now the machine that has been demonstrated can fly for just five to ten minutes, but if that could be made to at least 30 minutes. The vehicle is electric and is different from the regular helicopters and airplanes. These vehicles would be a great alternative for the vehicles that run on the road. Some of the major problems the company is facing here are the battery sizes, air traffic control and other infrastructure problems that could be a hindrance in terms of commercializing the vehicles.

The vehicle could hardly get any buyers if it costs US$10 and if it runs for just five minutes. The chances of its commercialization would further decrease if they constantly start falling from the sky. The company will continue to work on the technology and is expected to launch the flying car in 2023.