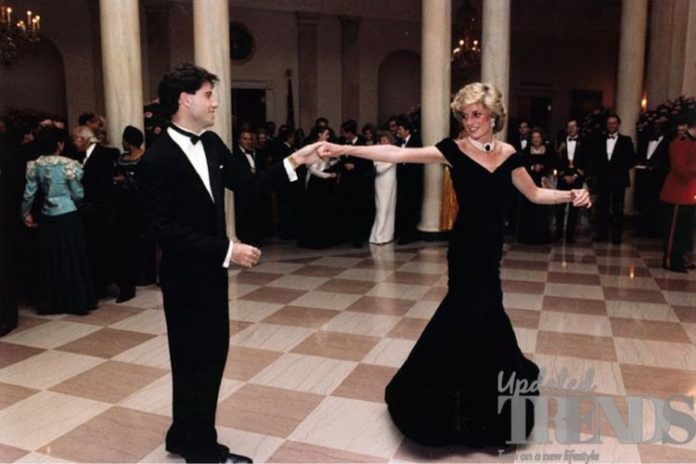 Princess Diana, who was the first wife of Prince Charles, was known for the number and variety of outfits that she wore. She was not just known for her charity work but was also known as a fashion icon. Her outfit choices might have broken many protocols of the Royal family, but she always managed to maintain a stand. Now some of her outfits are out for auction. One of the dresses which is put up for auction includes the blue evening gown that was created by Victor Edelstein.

Princess Diana had worn that gown while dancing with John Travolta at the White House in 1985. The member of the Royal family has worn it on a number of occasions but it is specifically remembered for the time when she wore it to dance with John Travolta. The two had danced to the tunes of the song from Travolta’s film Saturday Night Fever. The outfit will be a part of the Kerry Taylor’s Auctions of Passion for Fashion .It is expected to be grabbed for 250,000 to 350,000 pounds or 325,000 to 450,000 dollars.

Travolta remembered the experience during an interview in 2007 with a Dutch television station, Een. The actor had then said that he did not expect to dance with Princess Diana and that it was Nancy Regen, the president’s wife who had wished the dance the happen. Travolta while talking about what he had to do on that midnight, shared that he had to tap on her shoulder and say, ‘Would you care to dance’?. The actor further shared that Princess Diana then turned and gracefully dipped her head in her signature way and they danced for about 15 minutes together.

Travolta expressed that he would never forget that as he was honoured to have experienced that as it was her favourite moment. Such moments from the past surely make history and are remembered forever.