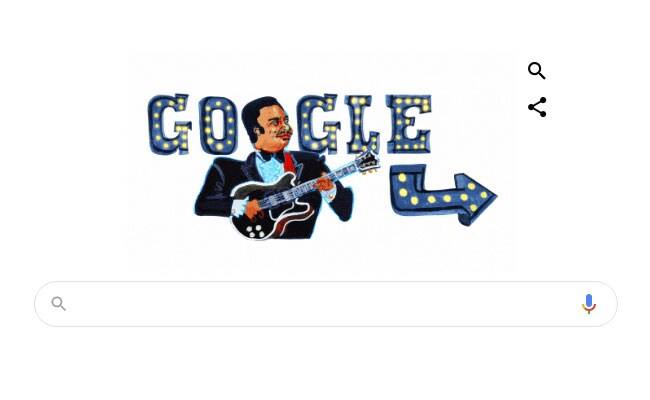 It has been a trend with Google to honor some of the noteworthy people who have made a mark in their respective fields. American singer and guitarist B.B King is the latest who has been honored with an emotional Doodle by Google. The Doodle is observing the 94th birthday of the iconic singer on September 16, 2019. The link on the Doodle redirects the users to some of his popular song –The Thrill is Gone Away, on the video streaming site YouTube. B.B. King was fondly called as the King Of Blues and the Doogle has a sketched picture of the singer as he holds his guitar.

Riley B. King was born in 1925 in Itta Bena, Mississippi. Since he was born on a cotton plantation, he started off working at a cotton gin, which is a machine that separates the seeds from cotton. But his fate had different plans for him and he was more passionate about music. His talent was known as he sang gospel music in the church. King remained determined and decided to take his career further and started off by working at the local radio and juke joints.

People in his locality started calling him as Beale Street Blues Boy, which later became Bee Bee, which ultimately made him B.B. King. The year 1949 was when he started recording  and his first hit song that he recorded was Three O’Clock. Since then King did not stop and went on to release his own albums that touched millions of hearts.

Some of his remarkable albums include Sings Spirituals, Singin’ the Blues, My Kind Of Blues and Indianola Mississippi Seeds. King passed away at the age of 89 on May 14, 2015 in Las Vegas. In June 2019 it was reported that B.B. King’s material was destroyed in the 2008 Universal Fire along with hundreds of other artists.