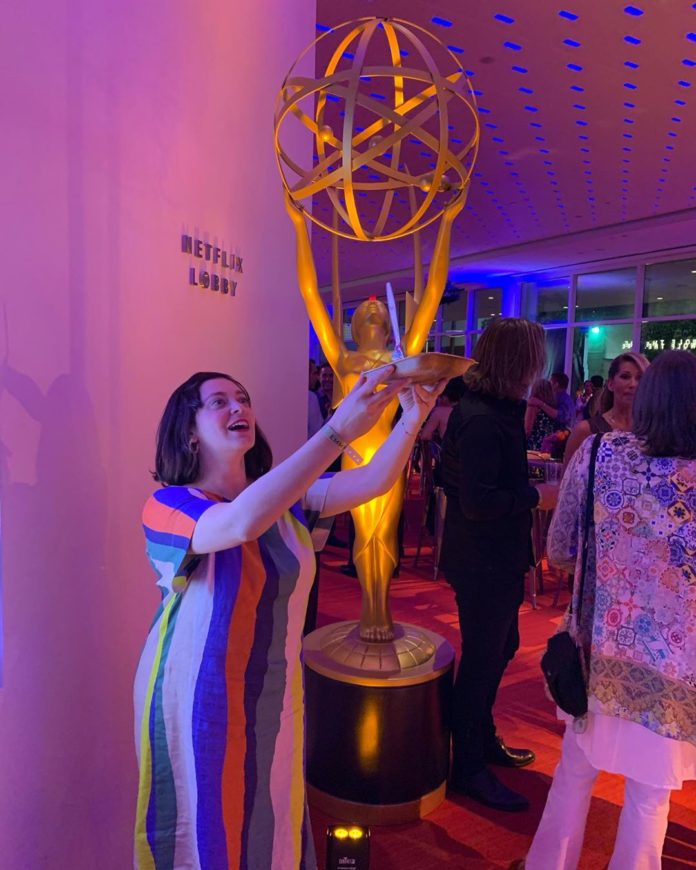 American actress and singer Rachel Bloom has announced that he is expecting her first child with husband Dan Gregor. Bloom recently bagged the Emmy for best original music and lyrics and made the announcement back stage on September 14, 2019 at the Creative Arts Emmy Awards. The actress who played Rebecca Bunch in the comedy-drama series Crazy Ex-girlfriend, joked that she had planned to reveal it on Instagram but though that doing it at the Emmys was even better.

Bloom won the award with Adam Schlesinger and Jack Dolgen for the song “Antidepressants Are So Not A Big Deal”. The actors left behind other nominees from the shows like Documentary Now and Saturday Night Live. Makers of Crazy Ex-Girlfriend put an end to its run on the CW in April, 2019 after four seasons. Bloom says that more than 150 original songs were written by her and her team through the run of the show.

Rachel throughout her career has been nominated for six Emmy awards and all of them but one, was for her work on Crazy Ex-Girlfriend. The actress has also won a Golden Globe Award for Best Actress – Television Series Musical or Comedy and a Critics’ Choice Television Award for Best Actress in a Comedy Series. Bloom has had a history of mental illness and was also diagnosed with anxiety, depression and OCD.

Bloom and Gregor got married in 2015 after dating for about six years.  The actress has earlier suffered from mental issues and has been diagnosed with conditions like anxiety, depression and OCD. Rachel has never hidden about her diagnoses of her mental illness and has always been honest about it in open. The singer released her first musical comedy album named Please Love Me in 2013. In 2016, Rachel was also awarded the Visionary Award. She has also worked as a TV writer for Robot Chicken and Allen Gregory.