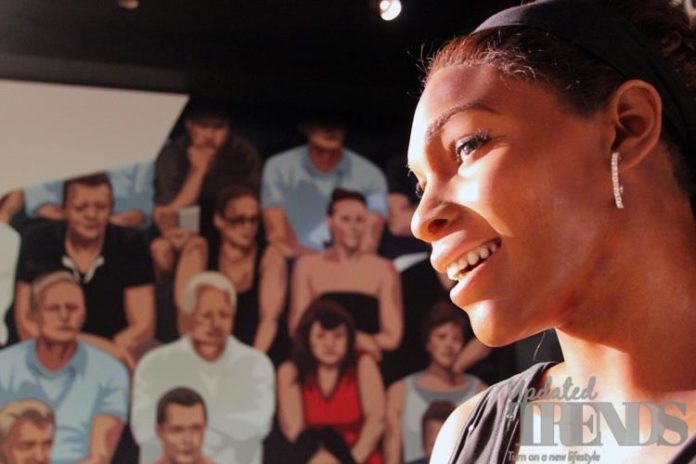 Star athlete Serena Williams, won hearts of the audience as she walked the ramp at the New York Fashion Week. The Tennis star showed off the latest collection from her self-titled label last night, Serena walked the ramp and acknowledged the crowd with her two year old daughter Alexis Olympian Ohanian Jr. The little one was at her stylish best in a black t-shirt, grey ruffled skirt and color blocked Nike Air Max 90 sneakers.

Olympian was seen clung to her mother who carried her in one arm while waving to the audience with the other. William too looked pleasant in a snakeskin print wrap skirt with a sheer buttoned down lace top, boots and layered bracelets. The collection ranged from leopard and neon attire that are office friendly along with sequined gowns. The “see now buy now” offering will be available for purchase online 48 hours after the show.

Olympia Ohanian is a two year old daughter to Serena with husband Reddit co-founder, Alexis Phanian. She was featured while teasing the collection before the runway show. In a video that was posted on Serena’s Instagram, Olympia can be seen hiding behind her mother’s skirt and then emerges in a sequined jacket, polka dotted shirt and a logo t-shirt from William’s brand.

September 1, 2019 was Olympia’s second birthday and was celebrated by posting an image from her daughter’s birth. Serena Williams posted a picture that showed the couple right after the birth of their daughter. Alexis and Serena got married on November 16, 2017 in New Orleans. The guests at the wedding included Kelly Rowland, Beyonce, Kim Kardashian West and others. In April 2017, it was confirmed by the couple, that the tennis star was expecting their first child together. Serena was reportedly 8 weeks pregnant when she won the Australian open in January that year. The tennis star gave birth to her daughter Olympia through a c-section due to a complication.