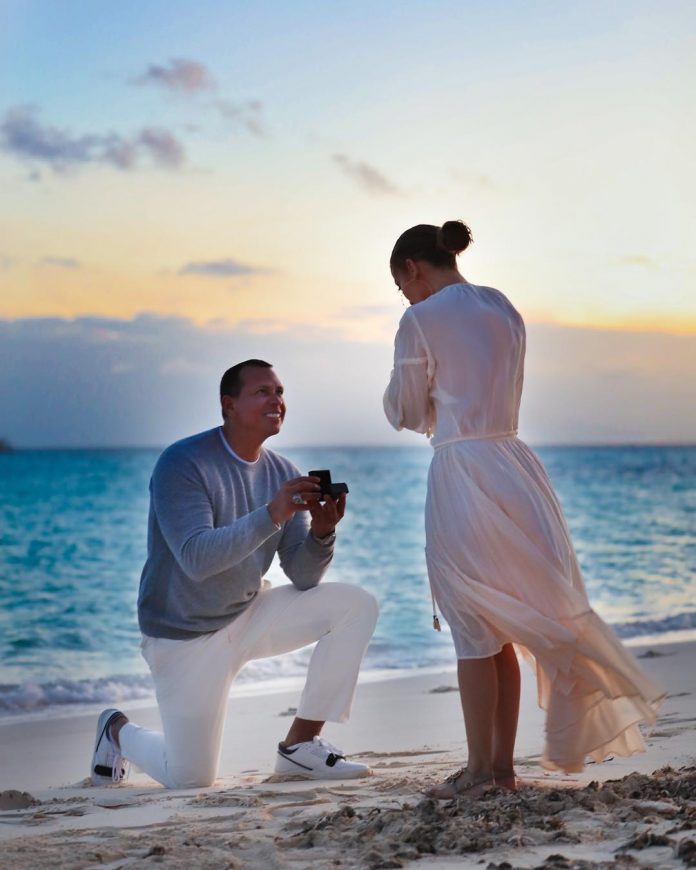 American singer and actress Jennifer Lopez shared a few pictures on her Instagram account, which have shown boyfriend Alex Rodriguez officially propose his lady love. The picture has shown a lovely beach side where Alex can be seen on his knees as he shows the engagement ring and a surprised JLo stands in front of him in a flowy white outfit.

The pictures of the proposal went viral on the internet on March 10, 2019. The proposal was made on March 9, 2019. The pictures of the proposal were also shared by Alex who captioned, “Locking it down. #futuremrsrodriguez. The picturesque backdrop made the moment even more romantic. Yes, the ocean blue water and sunset in the background give us major movie feels.”Jennifer looked gorgeous in a cream coloured outfit while Alex looked dapper in a sky blue shirt and white pants.

Alex and Jennifer have been dating for two years now and seem madly in love with each other. Now that the couple is engaged, the fans cannot wait to see JLo walk down the aisle. The proposal took place in the Bahamas where the couple is currently vacationing.

The engagement celebration continued as the couple boarded a private jet that was decked with cute mementos for their engagement. Jennifer Lopez was earlier in an on and off relationship with former backup dancer Casper Smart and their relationship lasted from October 2011 to August 2016. Before dating Casper, the actress was married to Marc Anthony and together they are parents to twins, a song and a daughter born in February 2008. Before dating Anthony, Lopez had dated producer Ben Affleck but had broken up in January 2004. The personal life of Jennifer has attracted the media a number of times. She was first married to a Cuban waiter Ojani Noa but their marriage did not last long.