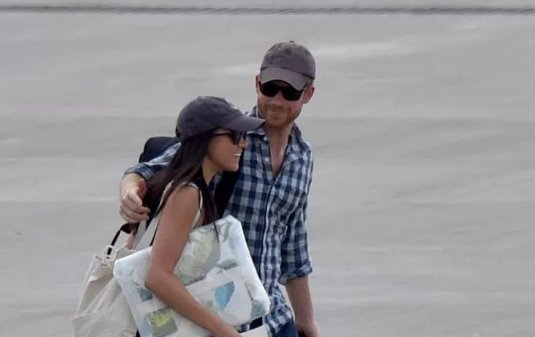 It’s been almost a year since the world began to swoon over HRH Prince Harry’s new girlfriend, Suits actress Meghan Markle. And the couple don’t seem to be stopping their love affair. Though they are extremely private individuals, the paparazzi can’t wait for one chance or the other to catch the two together. This time, the loved-up couple were photographed exiting a private plane to Botswana.

One of the first things you notice about the couple is that they are so mature even when being swarmed by the shameless shutterbugs. Meghan celebrated her 36th birthday recently, and it looks like Harry is giving her a birthday gift a little belatedly. Just last week, the actress and her mother were spotted taking in the sites at London, her new favorite city.

There are rampant reports that Prince Harry and Meghan Markle will be engaged soon enough. The twosome are like peas in a pod, “chilling at home”, according to sources, and cooking and watching movies, like Disney’s Moana. Markle had accompanied the ginger-haired royal as his plus one to Pippa Middleton’s wedding. She was even spotted at one of Harry’s polo matches, where they were photographed sneaking in a kiss or two.

Africa is a very dear place to Prince Harry’s heart. But, if you’re thinking that he’s going to get down on one knee and propose there, that might not happen. After all, brother Prince William had asked Kate Middleton to marry him while on a trip to Africa in 2010.

Whatever may happen, it’s so comforting to see Prince Harry happier than he’s ever been in public. The usually brooding British royal met his match in Meghan Markle during the Invictus Games taking place in Toronto last year. Markle lives in the Canadian mega-city to shoot for Suits.