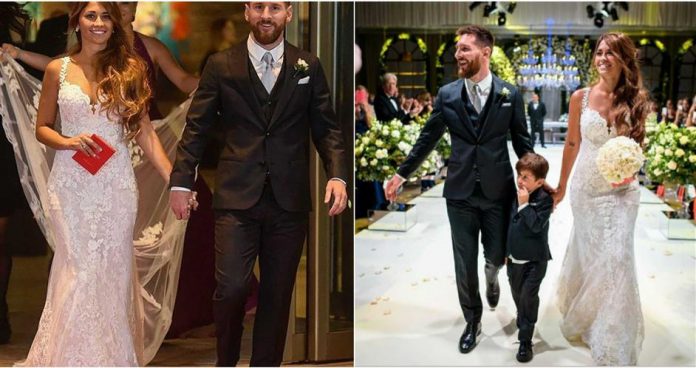 Argentina’s superstar footballer Lionel Messi tied the knot with his childhood sweetheart in a lavish ceremony over the weekend. Messi, 30 and Antonela Roccuzzo, 29, said ‘I do’ in front of 260 guests that included other celebrity footballers and their wives and girlfriends.

Lionel Messi’s football club contemporaries, including Luis Suarez, Neymar and Gerard Piqué arrived in private jets to attend the wedding, along with their wives, including Spanish pop star Shakira. Local newspapers tagged the nuptials as the “wedding of the century” and scores of fans made their way to the airport to catch a glimpse of their favorite sporting stars. Tight security was hired for the wedding to prevent gatecrashing and unwanted paparazzi from catching the private event. The ceremony was held at the exclusive Rosario’s City Centre hotel.

Messi and Roccuzzo met when he was just 5 years old and were friends, before he moved to Spain to play for Barcelona. Antonela Roccuzzo is the cousin of Messi’s best friend, Lucas Scaglia, who also turned to football as a profession. The couple share two sons together. The bride donned a wedding dress by designer Rosa Clara, who has also dressed Eva Longoria and Queen Letizia in the past.

The reception included a mass buffet that served Spanish cuisine, including empanadas and cow offal, with a sushi station for picky guests. Argentinian football legend, Diego Maradona was omitted from the guest list, as was Messi’s former coach, Pep Guardiola, who now serves for Manchester City.

Lionel Messi was recently in a legal scandal for failing to pay taxes. He is unlikely to face any jail time, as could be let off by paying a massive fine.

Here’s wishing the dashing football star and his wife a happy married life together!