Yes! Awards season in Hollywood has officially begun. True, it isn’t yet the prestigious night at the Academy Awards, but don’t we just love an excuse for our celebrities to turn up all turnt up and rocking the red carpet? So, the crowning season has kicked off with The Critics’s Choice Awards 2016 that took place at Santa Monica Airport’s Barker Hangar on Sunday. The event was hosted by comedian T.J. Miller and saw those who put their best forward this past year win it big. Here are the best dressed on the red carpet for The Critics’ Choice Awards 2016 –

The This Is Us actress looked stunning in this deep plunging, deep blue gown.

New father-of-two, the actor is now EW’s Entertainer of the Year and looked dapper in this grey-and-black suit.

The actress was nominated for Best Supporting Actress with her role in Manchester By The Sea. She turned up in this simple Louis Vuitton ensemble with slits to the side.

This season is going to be a big one for This Is Us and here is another star from the show in a plunging blue gown with embellishments.

Star of Fresh Off The Boat, the actress brought it to the red carpet in this white floral gown.

The actress from Transparent really gives off a glamorous winter vibe with this glittery sequin dress and turtleneck.

The A-list actress and Oscar nominee turned up on the red carpet in this off-shoulder white gown.

The singer and actress played it colorful in this black and multi-colored floor-length gown.

The A-list actress stunned on the red carpet in this bejewelled plunging gown. So much is going on in one dress, but somehow it all fits just right! 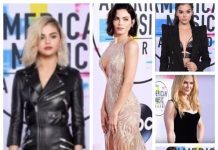 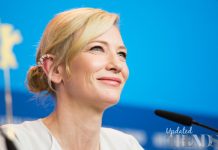 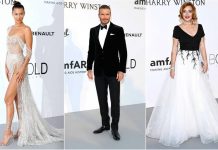