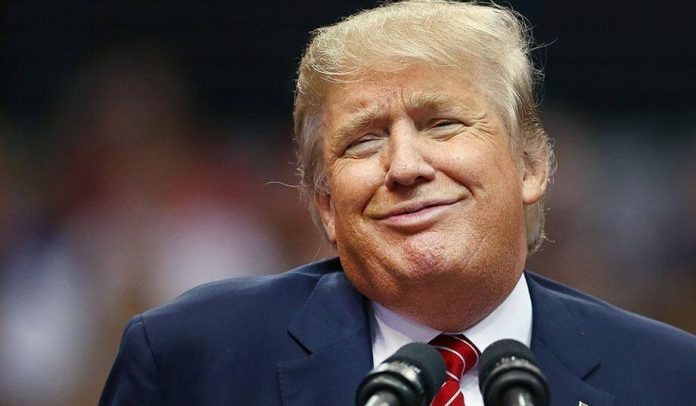 It cannot be denied that during the time of the election campaign, Donald Trump who has been chosen to be the next President of the United States, has been publicly credited with some terms that include a racist, a xenophobe, and a misogynist. However, now Donald Trump has achieved being called a gas lighter, which to many people is rather daunting.

Lauren Duca has recently submitted a public piece that was boldly published online by Vogue Teen. She has not shied away from declaring her stance that she believes that Trump has lied to the American people, which she believes is his way of undermining the true freedom of the American people. She suggests that he has abused the American people by using unfair tactics associated with gas lighting. Many people have appreciated her online for her bold statements regarding this issue.

As stated by The National Domestic Violence Hotline, the term “gas lighting” is defined as being a type of abuse which results in the victim thus questioning the legitimacy of their own real circumstances and worth. 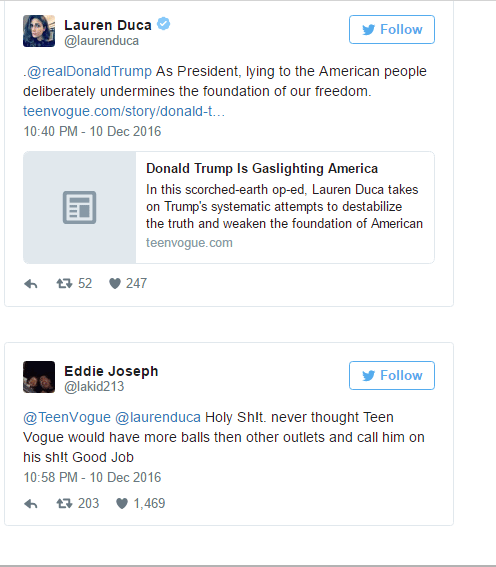 Lauren Duca explained that this term originated from a play presented back in the year of 1938, which was called “Gaslight.”The theme of the play is that an overtly abusive husband tells his wife that she is imagining the lights are turned out and that she is on the verge of losing her mind, though in reality he had indeed turn the lights out.

Robin Stern, who is a psychoanalyst with a Ph.D., reported in an article for Psychology Today in May of 2009 that there are three parts to gas lighting that occur.

1. The process of disbelief

The victim does nothing wrong and is not at fault. But the victim realizes that strange things are happening in relationships with others. The others discredit the victim. And the then the victim begins to wonder about his or her on validity and develops a need to defend himself or herself to the abuser. At this stage, the victim still does believe in himself or herself somewhat.

2. The process of defending

The need of the victim to defend himself or herself grows because the abuse has terribly increased to another level. But in reality, there is no point in defending oneself to the abusers, since the abusers are not willing to accept the point of view of the victim at all. The best thing is for the victim to get out of the situation and to stay away from those abusive tormentors. But the victim falls prey to needing to be accepted and valued by the abusers, though the abusers never accept or value the victim.

3. The process of depression

By now, the victim questions himself or herself over and over again. The victim wants to be accepted by the abuser and tries to resolve every criticism from the abusers. But it does not work. And thus the person loses his or her joy and his or her sense of worth and who he or she really is. The victim pitifully accepts the point of views of the abusers instead of clinging to one’s own sense of true value.

Lauren Duca claims that Donald Trump resorted to these gas lighting schemes by manipulating the American people psychologically on many levels. She states that Trump promoted lies, that he would not take any responsibility for what he said, and that he only accused people of attacking him when questioning his statements. This has resulted in Americans arguing among themselves when peace should have been the ultimate goal, which left many questioning their own validity.

You can read all the tweets by Lauren Duca right here