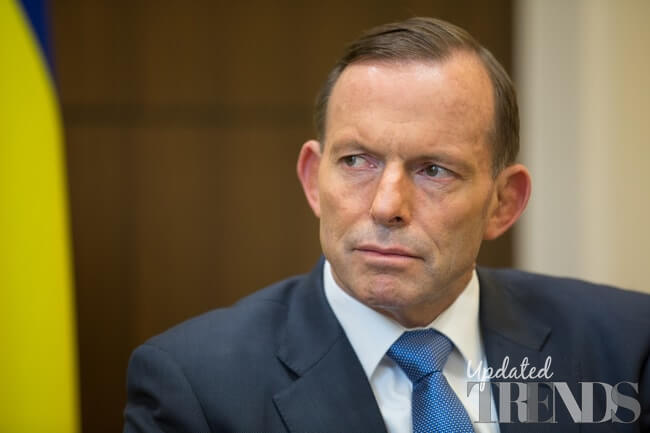 As Australia looks forward to a voluntary two-month polling that will bring forth people’s votes for or against same-sex marriage closing on November 7, 2017, Australian Prime Minister who is a staunch opponent of same sex marriage was being allegedly head-butted by a 38-year-old man in Hobart, Tasmania on Thursday, September 21, 2017 morning post which Abbott reportedly filed a police complaint.

Albeit the PM’s views rest on Hobart wearing a ‘vote yes’ badge for same-sex marriage survey and that he had been head-butted by the man because of the fiery and infamous debate around gay marriages, the man refuted the claim saying that it was his “personal hatred” for Abbott that prompted the violent action. The alleged assaulter told the ABC news that he chose to head-butt the PM “because I didn’t think it was an opportunity I’d get again.”

The incident that has happened in the wake of the same-sex marriage survey provoking both support and disapproval has left Abbott with minor injuries and a swollen lip as he was quoted saying that the episode exhibited “politically-motivated violence”. The incident was condemned by commoners and politicians alike.

Meanwhile, Alex Greenwhich who has been campaigning marriage equality in Australia so far wrote on his Twitter handle: “There is absolutely no place for violence in the marriage equality debate. “This is about treating people fairly and with respect & dignity.”

Like many people across Sydney, I received my postal survey today and posted it back. I voted for my husband Victor, who like so many Australians just wants this done! Make sure you #PostYourYes #marriageequality

The 38-year-old alleged assaulter has reportedly been charged with ‘common assault’ and was granted bail. Reports suggest that he will further have to appear for his hearing on October 23, 2017.

The violence down under seems to be at an upsurge as last week former prime minister, Kevin Rudd’s godson was attacked in Brisbane over the same debate of same-sex marriage.

Amid this vitriol and hate speeches that have emerged alongside the debate, it is yet to see if Australia becomes the 25th country that legalizes gay marriages. English singer, Elton John has however, reportedly extended his support and hoped Australia legalizes the same-sex marriage on his Instagram account.

I’m so excited to be back in Australia for a series of shows. Many years ago, I chose Australia for my wedding to a wonderful woman for whom I have so much love and admiration. I wanted more than anything to be a good husband, but I denied who I really was, which caused my wife sadness, and caused me huge guilt and regret. To be worthy of someone’s love, you have to be brave enough and clear eyed enough to be honest with yourself and your partner. Almost 24 years ago, I met the person with whom I could be fully myself. When we married in 2014, it felt like that fact was accepted by the world. For David and I, being able to openly love and commit to one another, and for that to be recognised and celebrated is what makes life truly worth living. That acceptance and support makes us want to be as kind, responsible and productive members of society, as well as the best parents, that we can be. I love Australia. I love its spirit, it’s lack of pretence, it’s passion. I hope it can embrace the honesty and courage that seeks gay marriage as an expression not of desire but of love. #loveislove #marriageequality @davidfurnish

John joined the bandwagon of other Australian artists and famous figures, the likes of Ellen Degenres and Liam Hemsworth in his support for same-sex marriages. John is married to Canadian Filmmaker, David Furnish.

Queen Elizabeth II to return to Buckingham Palace for work

Quantas Airlines flight to nowhere sells out in ten minutes

Amazing ways how cucumber can be beneficial for skin

Ingredients that could also qualify to be used in salads

Ways to eat healthy without sacrificing your favourite foods

Amazon gets approval from FAA for its drone delivery fleet