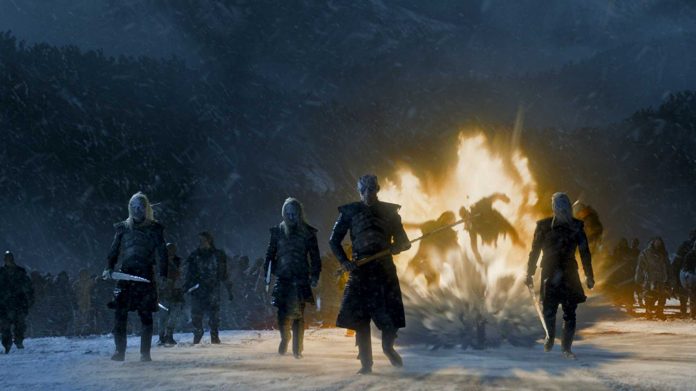 So by now you probably know that someone at HBO Spain is going to get fired. The sixth episode of Game of Thrones Season 7 was fully aired four days before it was supposed to. Though it was taken down a full hour after the record 70-minute episode aired, our beloved internet pirates managed to record it for all the world to see. And see we did. Major spoilers ahead, so brace yourself, because Winter is here.

You can expect something epic to happen in the longest episode of Game of Thrones ever.

The band of Jon Snow, Thoros of Myr, Beric Dondarrion, The Hound, Gendry and Tormund Giantsbane have made their way to Eastwatch and beyond. They manage to take over a small group of White Walkers, who die when their team leader is killed. They capture one alive to take back to Cersei and Daenerys, with their mission seemingly accomplished. However, thanks to the shrieks of their captured undead friend, a larger army of White Walkers soon surround the group.

The band are left stranded on a tiny rock surrounded by frozen water that can hold the undead at bay until it freezes it over. And freeze it does. Snow has had the mind to send Gendry back to Eastwatch to send a raven to Daenerys, his only hope. As the army, led by the Night King surround the men, Daenerys arrives with her three dragons. She has been warned by the Hand, Tyrion, with a “sometimes doing nothing is the hardest thing”. Nevertheless, she makes her way, mostly to be a hero to Snow, who’s longing gazes at her in the caves at Dragonstone have not gone unnoticed.

And now, our worst fears are coming true. The Night King’s spear pierces one of her dragons, not Drogon though thankfully. It was almost as if the scene with Jaime Lannister in The Spoils of War are eerily being repeated. Deja vu and all that. There’s the Night King approaching her with a spear, there he is playing javelin and winning, with the mighty dragon coming tumbling down.

Dany is forced to leave Jon Snow behind, though he makes it in the nick of time, Longclaw in hand. His uncle Benjen Stark saves him with his fiery ball-and-chain. Thoros of Myr has succumbed to the wounds of an undead polar bear, but other major characters are safe. For now. Snow is left bare-chested in a ship heading back to Dragonstone, and he refuses to leave the hand of “Dany”, who he now calls his Queen.

Back at Winterfell, things are going from bad to worse between Sansa and her sister. Arya confronts the Lady of Winterfell with the damning note she found, thanks to Petyr Baelish. She accuses Sansa of betraying her family, even though Sansa claims she was a child when Cersei forced her to write the note that would lead to not only Eddard Stark, but Robb Stark and Catelyn’s deaths. What Sansa is most afraid of, is that the Houses under the Stark banner will label her a betrayer and she will lose power.

When Sansa rummages around Arya’s room, she finds the masks, faces of different men in Arya’s bag. And there is that dagger again, the one which was supposed to kill Bran those many ages ago. Arya confronts her, telling her where she learnt her skills and playing a dangerous game. While Arya seems to threaten Sansa, she hands her the dagger, metaphorically asking her to use it for good purpose. Will Sansa be the one to put that dagger through Baelish’s heart?

And oh, did we forget to tell you how Death Is The Enemy ends? Why, the Night King has the dead dragon resurrected to join his army of the undead.