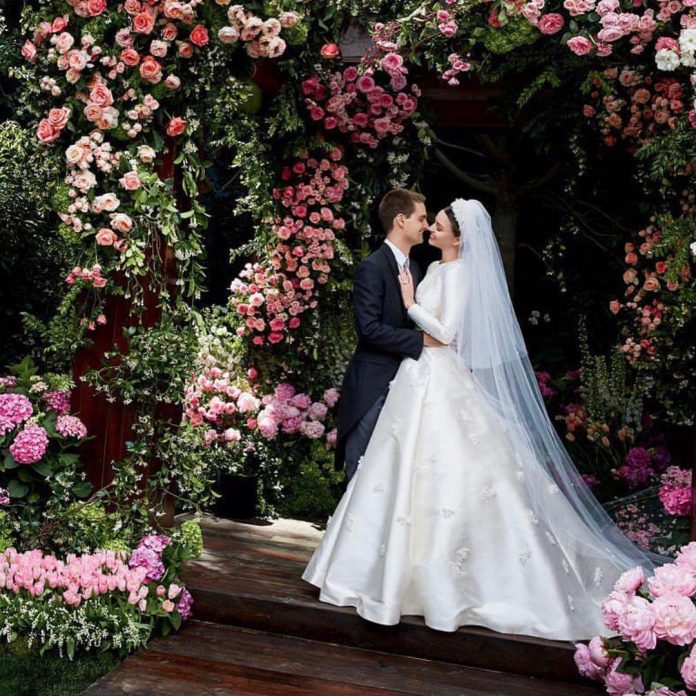 Australian supermodel Miranda Kerr and her billionaire beau, Snapchat CEO Evan Spiegel tied the knot on May 27 this year. The gorgeous couple had an extremely intimate ceremony that involved only 50 guests, including Kerr’s son, Flynn, from her first marriage to Pirates of the Caribbean star Orlando Bloom.

Fans kept speculating as to what her wedding dress would look like, and finally, it has been revealed! The fashionista Victoria’s Secret star has released the first official images from her fairy tale wedding through Vogue. In the upcoming August issue of the international fashion magazine, the star looks stunning in a wedding gown designed by Maria Grazia Chiuri with a floral headpiece by Stephen Jones.

Vogue has also posted a video of her wedding dress, the day she said ‘I do’. The supermodel says in the video that it was Grace Kelly who inspired her wedding look. The icon had married Prince Rainier III of Monaco. Her bridal gown is considered as one of the best wedding looks of all time.

When talking about her wedding look, Miranda Kerr told Vogue, “Honestly, I couldn’t have imagined a more beautiful wedding dress. When I was young, my grandmother told me, ‘Miranda, men are very visual. It’s important to look good.’ I was like, ‘Ok, nan’.”