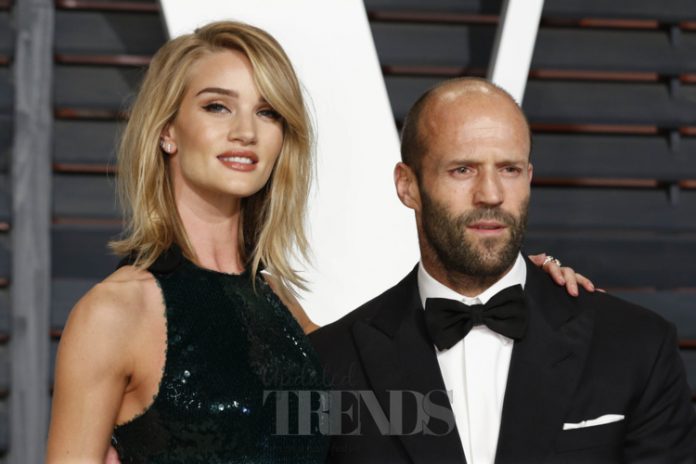 English supermodel Rosie Huntington-Whiteley and her action star beau, Jason Statham welcomed their first child, a boy, to the world this past Saturday. The gorgeous couple have named their little one Jack Oscar Statham and introduced him to the world on Instagram. Rosie captioned the black-and-white image of her holding her baby’s hand, with the caption: “Our little man arrived! Jack Oscar Statham 8.8lbs on Saturday June 24th”.

The Victoria’s Secret Angel has been excited about her pregnancy and has previously said that she feels “life has just started” for her at the age of 30. She made the announcement by showing off her baby bump on social media back in February. The sultry image of her kneeling down on the beach in a bikini with the photograph taken by Statham caught the world’s attention, with numerous fans wishing her well.

The Mad Max: Fury Road star and her Crank partner Jason Statham had been together for seven years, before they announced their engagement last year in January. The happy couple have made numerous appearances on the red carpet and seem to continue to be smitten in love. The gorgeous model had previously spoken to an international magazine about her life after she delivers her baby. She had said, “I always see myself working, but definitely being a mum will be a big part of me. I think there is naturally a point where you think, ‘I don’t care about myself as number one any more.’ I want to care about other things.”

Rosie Huntington-Whiteley isn’t the first supermodel to become a mother this year. Her fellow Victoria’s Secret comrade, Irina Shayk and Bradley Cooper welcomed their own child, Lea De Seine in March. The couple have been photographed only a couple of times since then, out and about with the bundle of joy. We are sure the two new mothers, Rosie and Irina, will have a lot to talk about backstage at some of their international fashion shows!

Here’s wishing Rosie Huntington-Whiteley and Jason Statham a happy life together with their Jack!