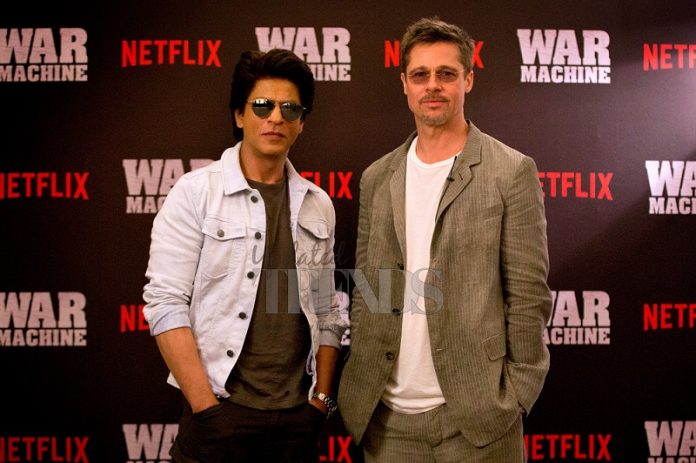 This 53 year old actor can give any other actor a run for their money. That’s right! We are talking about the splendid Brad Pitt. He will be soon seen in a lampooning war movie titled War Machine. He was recently spotted in Mumbai promoting his movie along with Bollywood actor Shah Rukh Khan.

Brad landed in Mumbai early on Wednesday and has been staying at an opulent hotel in South Mumbai. Later in the evening that day, two of the most credible actors, Brad and Shah Rukh spent the evening at the low-key event with Rajeev Masand interviewing them at the Oberoi Trident’s lobby. They discussed everything under the sun but things started taking a serious turn when these actors started to give cut-to-fit answers.  Shah Rukh also stated that he loved Brad’s movie, 12 Monkeys.

On being asked, as how has he kept himself consistent in his career, Brad replied “I try to reinvent (myself). I constantly look for something new and we have been fortunate to survive our mistakes along the way. I think I just try to be relevant.”

According to a journalist’s statement in a leading daily – “Although The two superstars sat comfortably next to each other, they weren’t exactly what you’d call, hitting it off. There was a bit of restrained tension and There were those awkward compliments.”

Well that’s probably what we should expect when two veterans, who arguably are experts in their fields, come together.

Coming to the movie, War Machine is a comedy-drama movie where Brad plays the role of Captain General Glen McMahon (based on the real-life of Gen. Stanley McChrystal) who gets posted in Afghanistan. This movie also stars Anthony Hayes, John Magaro, Emory Cohen, Anthony Michael Hall, Topher Grace, Will Poulter, Tilda Swinton and Ben Kingsley.

Brad has been lately really busy with promoting his movie world over. This being his second visit to India, his last visit was with former wife Angelina Jolie when she had arrived for the shoot of her movie. Don’t forget to catch the movie, only on NETFLIX! Until then watch this trailer of War Machine.

My best 2 David & Brad for the release of War Machine on @netflix Pleasure to meet u both & Brad the dance remains pic.twitter.com/mxq0GKrqoL