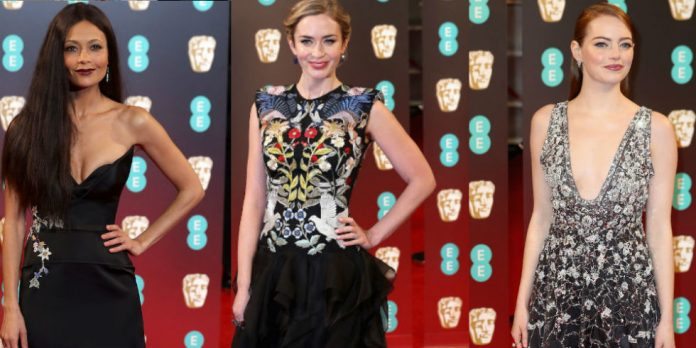 The 70th annual British Academy of Film and Television Arts (BAFTA) Awards 2017 was held this year at Royal Albert Hall. The Duchess and Duke of Cambridge, Kate Middleton and Prince William attended the event, to add a little bit of royalty to the biggest night in film in the United Kingdom. Emma Stone-starrer, La La Land picked up major awards that night, including Best Film, Best Actress and Best Director, among others. The event was hosted by legendary British personality, Stephen Fry.

See also: The complete list of winners at the BAFTA Awards 2017

The Fifty Shades Darker star and his artiste wife hit the red carpet, looking perfect together, with her in a chakra-themed off-shoulder dress and him in a tux.

The Hacksaw Ridge star looked dapper in a white Burberry tuxedo. And he shared a cute moment with ex-Emma Stone as they hugged upon meeting on the red carpet. Both are up for major recognition this awards season!

The Florence Foster Jenkins star was accompanied by his partner, Anna Elizabet Eberstein on the red carpet.

The Split actress was seen in this gorgeous powder blue layered Gucci gown.

The Jurassic Park actress was accompanied by her legendary father, Ron Howard.

The Star Wars: The Force Awakens star smiled for the cameras on the red carpet.

The Lion actor and winner of the BAFTA Award for Best Supporting Actor looked handsome in a traditional tuxedo.

The Duke and Duchess of Cambridge added classy glam to the night.

The La La Land actress and winner of the Best Actress award looked pretty in this plunging neckline gown by Chanel couture.

The Harry Potter author hit the red carpet to support her new book, Fantastic Beasts and Where to Find Them that also won a BAFTA.

The good-looking couple hit the red carpet together, with Emily donning a colorful Alexander McQueen number.

The Beauty and the Beast star looked extremely handsome in this three-piece by Thom Sweeney.

The veteran actress hit the red carpet in a full black pantsuit.

The Manchester by the Sea actress looked beautiful in a silver short dress with black and red embellishments.

The Spotlight actress turned up in a flowery Gucci gown coupled with Atelier Swarovski jewels.

The Lion actress looked beautiful in this plunging neckline gown by Giorgio Armani.

The Swedish actress looked goth-chic in this black dress.

The exotic actress was ageless in this silver gown.

The Game of Thrones actress looked beautiful with a plunging neckline dress and thigh-high slit.

The Victoria’s Secret Angel looked gorgeous in this open back pearl white gown.

It’s rare that you see designer on the red carpet, when their creations are being modelled by the stars. But tonight was different with the legendary Valentino making a statement.

The Fences actress and winner for the Supporting Actress award donned this off shoulder blue Jenny Packham dress.