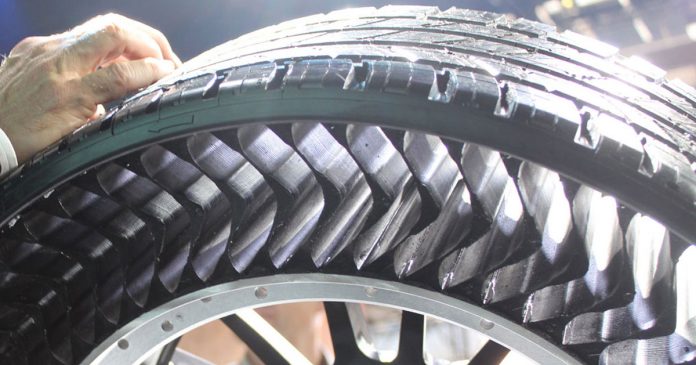 French tyre manufacturer Michelin, I the early 21st century had announced the Tweel that had combined the wheel and tire in to one piece and did not depend on the air pressure to operate properly. Tweel is not just beneficial for safety and convenience of never having a flat tires but also in automotive applications. The Tweel airless tires have the potential to be able to brake better which is often a significant performance compromise that is inherent in the regular tyres.

Unlike a tyre that is inflated with air , a Tweel can be designed to have high lateral stiffness and simultaneously having low vertical stiffness. This is possible as the design elements of the Tweel, the vertical and lateral stiffness are inseparably linked and can thus be optimized independently. This is possible as there is no air in the bladder under the tread and due to this the tread patterns, if desired even incorporate with water evacuation through holes in the design which eliminates or significantly reduces hydroplaning.

The tyre maker has said that it can last two to three times as long as a conventional tyre. The tread rubber around outer circumference is replaceable when it is worn as opposed to disposing the whole tyre that is worn. This will also help to avoid the environmental impact. Michelin has also faced some success with Tweel for low speed along with some commercial applications like lawn mowers, fork lifts and other power equipments, but still it has not been able to crack the passenger car market so far.

The company has developed a new version that is called as Uptis that stands for Unique Puncture Proof Tire system which uses combination of rubber and composites to create a mesh-like structure between and aluminum hub and the tread. Michelin has claimed that the Uptis rides as comfortably as the normal tire and has many significant advantages.