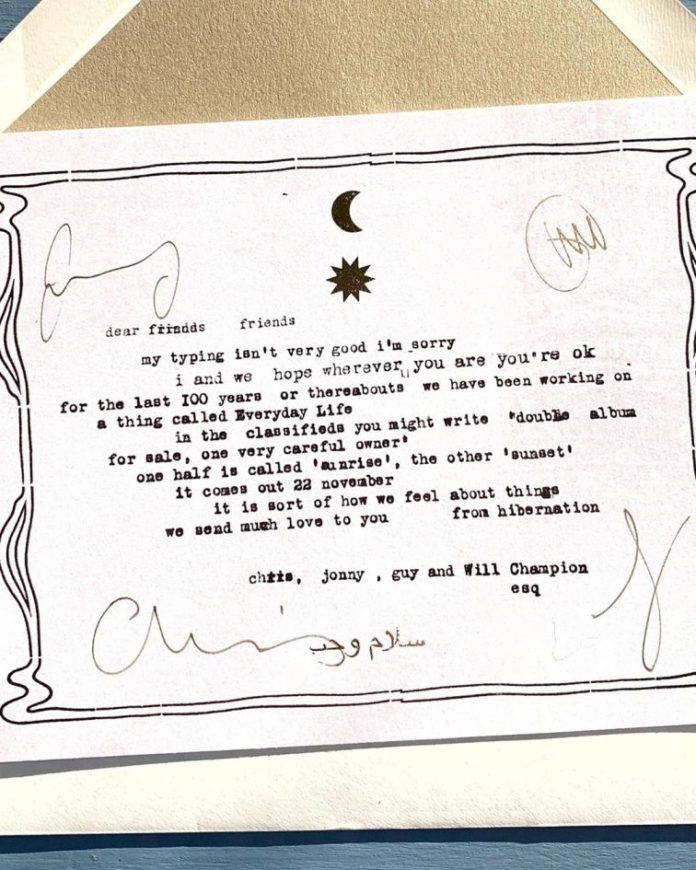 British rock band Coldplay has this time gone out of the box to announce their upcoming album. Their new album Everyday Life is all set to be released on November 22, 2019. The members of the band gave the release a personal touch and have sent letters to their fans while informing about the album. Many of the excited fans shared the surprise mails from the stars on social media on October 21, 2019.

The letter has a golden sun and a moon engraved on each of them and seem to be hand signed by the frontman Chris Martin along with other bandmates. The note first said that they are not good at typing and added that for the past many days they have been working on something known as Everyday Life and added that one half of it is known as sunrise and the other half is known as the sunset and is all set to be out on November 22, 2019. The note has further described that it is all about how they feel and concluded with love for their fans.

The band gave a hint about the album during the weekend and later on posted a vague video of its on Instagram which had a very unclear black and white picture and orchestral music. The upcoming album by Coldplay will mark their first full-fledged album since A Head Full Of Dreams that was released in 2015. The band had also featured at the halftime show of Superbowl along with Beyonce and Bruno Mars in 2016. ColdPlay also released their Kaleidoscope EP in 2017. It had collaborations with Big Sean and The Chainsmokers.

The British band shot to fame with their song Yellow in 2000 and in the same year released their first album Parachutes. The second album by the band was A Rush of Blood to the Head released in 2002.