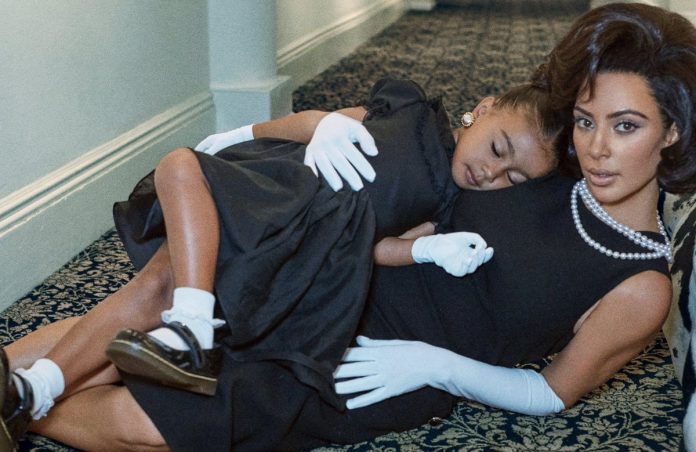 Kim Kardashian took her celebrity status to an all-new delusional level in the upcoming September issue of Interview magazine. The reality star posed with daughter North West in their first ever official magazine shoot together. And the magazine calls the sex tape star ‘America’s First Lady’.

North West gave her first interview to former supermodel Cindy Crawford’s daughter, Kaia Gerber, as well as her cousin Penelope Disick and Britney Spears’ sons, Jayden and Sean. In her adorable interview, the tot revealed that she loves pizza, she also loves her daddy’s song Amazing and that her favorite color is rainbow.

Kim Kardashian meanwhile continued with her usual narcissistic behavior, constantly trying to prove her worth and stating that people underestimate her. She spoke about North’s “normal” life at home, even though she got her daughter to pose for a magazine, ‘cuz that’s what “normal” kids do, right?

However, she did get a little realistic when she spoke about her life in the limelight. Keeping Up With The Kardashians has been around for over a decade now, and even though she’s constantly reminded that it all began because of a home video between her Ray J, she hasn’t been just lucky. “You can say a lot of things about me, but you cannot say I don’t work hard. I don’t sing, I don’t dance, I don’t act. But I am not lazy.”

In the magazine, Kim Kardashian dons the avatar of Jackie Onassis, minus the class of the former First Lady and wife of John F Kennedy. The shoot is styled like throwback images from the White House with a darker-than-usual skin tone on ‘America’s First Lady’.

This is the first public appearance Kim Kardashian is making since Taylor Swift called her and husband Kanye West out in her new single, Look What You Made Me Do. The video broke all YouTube viewing records, beating even Queen Adele.