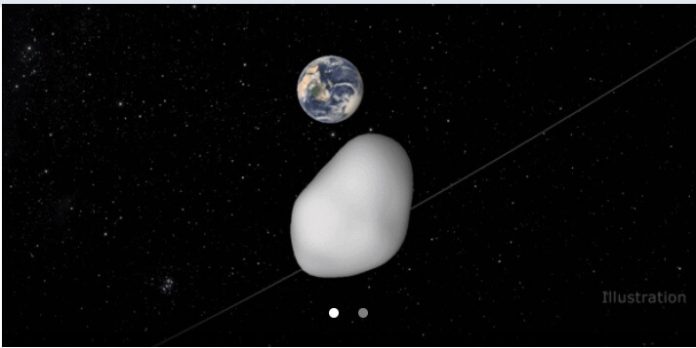 While today marks the day for a total solar eclipse in a “celestial coincidence” when the entire United States of America will be covered and sunrise, sunset and stars will all be visible together, the onset of September (September 1, 2017) will witness a huge phenomenon – a colossal asteroid passing Earth keeping a safe distance of about 4.4 million miles or 7 million kilometres. The asteroid is being called Florence after Florence Nightingale and it was reportedly first to be spotted in 1981.

The announcement for the asteroid’s impending arrival close to our planet has been made by the National Aeronautics and Space Administration (NASA). The size of the asteroid is almost close to planet Earth, it being 2.7 miles wide reportedly.

NASA has claimed in a press release that no asteroid this huge has been observed to come this close to Earth so far. This is also going to be the closest Florence has ever come to our planet since 1890 and one can view the massive rocky body with medium-sized telescopes for nights together. It will again come close to Earth in the year 2500, says NASA.

“Florence is the largest asteroid to pass by our planet this close since the NASA program to detect and track near-Earth asteroids began,” stated Paul Chodas, the manager of NASA’s Center for Near-Earth Object Studies (CNEOS).

The insides of the asteroid and minute details about its existence, surface matter and size will be studied by NASA that has now actively begun looking for near-earth objects and have been tracking bigger size celestial objects that have the ability to cause a major damage to Earth.

Astrophysics has never opened up to such vast possibilities and huge moments that cannot be missed when everything burns down to microseconds. It is truly now or never!