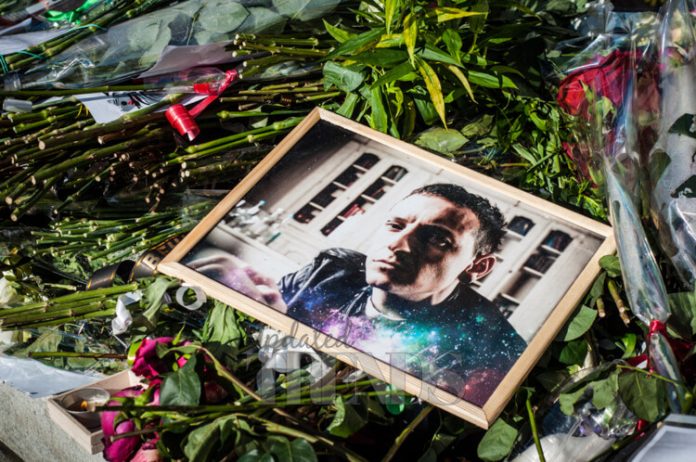 It’s been a tough week for global fans of Linkin Park. Undoubtedly one of the voices of the millennial generation, Chester Bennington will be heard no more, except in the music he left behind. The late singer passed away on July 20, finally succumbing to a lifetime of being a patient of depression. And the 41-year-old was laid to rest near his home in Palos Verdes, California at the Botanic Garden.

There was tight security to not let the media in, and his private funeral was held with family and close friends. Those who attended were given a wrist band and VIP passes, as it would have been done during any Linkin Park concert. This was, unfortunately, Chester Bennington’s final show. Among those in attendance, of course, included his Linkin Park bandmates, along with his family. There were also members of the supergroup Dead By Sunrise, which includes former Of Mice & Men frontman Austin Carlile and hip-hop artist, Blackbear.

During his lifetime, Chester Bennington had often openly spoken about his battle with depression, the side effects being alcohol and substance abuse. His pain and struggles were evident in the lyrics to almost all his songs for Linkin Park. The suicidal death of close friend and fellow musician, Chris Cornell of Soundgarden, deeply affected him. Chester decided to take his own life on what would have been Cornell’s birthday on July 20.

Reports suggest that singer was found by a housekeeper in his Palos Verdes home, hanging with a belt around his neck. A few minutes later, one of his bandmates arrived at the home to pick him up for a photoshoot, but was met with the shocking news. Linkin Park were set to kick off on their tour to promote their latest album, One More Light.

The service today was beautiful. Thank you Linkin Park, thank you Chester. For everything ❤❤❤