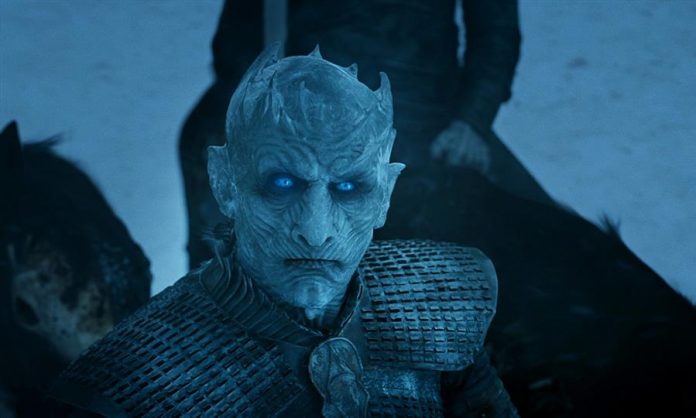 Forget the heat of the summer, because WINTER IS HERE! The upcoming Game of Thrones Season 7 second trailer just dropped, and it is intense! The smell of war is in the air, as the seven kingdoms and all of the free cities gather for the ultimate prize – the Iron Throne. The living and the undead with clash with swords, fire, ice and dragon breath in the biggest war sequences ever on television. All thanks to HBO!

The opening to the second trailer from HBO’s Game of Thrones Season 7 shows Sansa Stark, the Lady of Winterfell. Petyr Baelish’s voice says in the background, “Don’t fight in the North. Or in the South. Fight every battle, everywhere. Always in your mind.” And we hear that eerie familiar tune, The Light Of The Seven that played while the Sept of Baelor burned with Wildfire back in Season 6.

All the armies of the seven kingdoms, with their brave men and crowned kings and queens will come together, foe and friend, friend and foe. But with the rising of the storms of war is another threat that far outweighs the others – that of the White Walkers, who are a threat to everything that breathes. Winter is here, and the great battle has just begun!

In the trailer, we see a number of familiar faces – the Starks – Jon Snow, Sansa, Arya and Bran – the Lannisters – Cersei, Jaime and Tyrion – the Greyjoys – Yara and Theon – the Targaryens – Daenerys and her dragons with some major dragon teeth. There’s also the Wildlings, led by Tormund Giantsbane and Beric Dondarrion with his flaming sword.

The end of the trailer is now filled with the melancholy voice of Sansa Stark, as she says: “When the snows fall, and the white winds blow, the lone wolf dies – but the packs rise.”