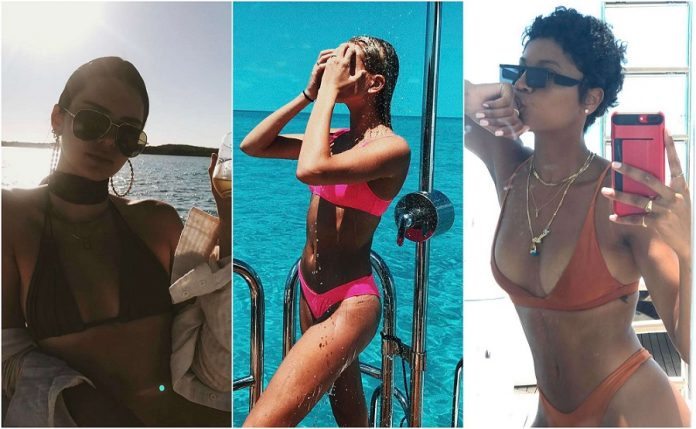 Kendall’s tropical getaway with her girls!

Kendall’s eye popping, jaw dropping and tongue rolling photos of her toned body in bikini has taken the internet by a storm, and once again the Karadashian-Jenner offspring has proved it that there is no vacay like a Karadashian-Jenner vacay! Kendall is seen posing on a yatch and waterbike along with the girls with whom she was found vacationing with. Although the destination hasn’t been found yet but we sure know it must be good.
Kendall was accompanied by Bella Hadid, Hailey Baldwin and Justine Skye who looked equally sexy in bikinis. They surely set the temperatures soaring at whatever place they were at.

The 24 year old photographer Renell who was with the girls, captured breathtaking photos and made the utmost use of the surrounding, and the girls did an amazing job posing for her. Renell shot to fame after she took amazing photos of Kylie Jenner, Kendall’s younger sister, at her birthday trip to Turks and Caicos last year and has been attracting more followers by the day since then.

you won’t find me

ya hair smell like the tropics, ya body look nice

Justine snapped this one ?