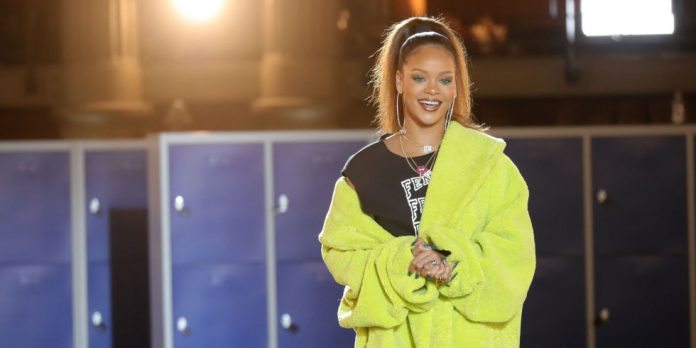 Bad gal Riri is slowly becoming a cult fashion icon, with her new music and of course, her bestselling clothing line for Puma. Last year, the Love On The Brain singer debuted her designer collection which she said was “Marie Antoinette in the gym”. This year, for Fenty x Puma Fall ’17 line, Rihanna and her models took the runway at the ongoing Paris Fashion Week. Her theme was the ‘rebellious schoolgirl’, and she lived up to the hype, by walking the runway on an elongated library table with lamps and books thrown helter-skelter.

In keeping up with the whole academic theme, the invitation cards were shared on social media, a short video that was designed like a schooling detention card, beginning with “I will not be late” written repeatedly, á la Bart Simpson opening credits for The Simpsons. And Rihanna has apparently opened her own F.U. or Fenty University. Creative!

Our Autumn Winter collection from @PUMA by @BadGalRiRi premieres tomorrow at #ParisFashionWeek. Don't miss the live broadcast at 3pm EST/ 9PM CET. Tap the link in bio to like us on Facebook. #FENTYxPUMA

The Fenty x Puma show was held at the prestigious National Library of France in Paris, with models walking atop reading tables, giving a whole academic vibe to Fenty University (FU) class of 2017.

Rihanna's Fenty Puma is in the French National library. Get ready for schoolgirls and boys,#PFW pic.twitter.com/zzlNjjfQvd

Rihanna shared a video on her own personal Instagram, where she talks fondly about the new line. She says that a lot of pieces are simple, but it goes on to something more complicated, which is what she likes. She also declares that she is in love with this line more than any other one she has come across.

BTS. Counting down the minutes until my #FENTYXPUMA AW17 fashion show! #PaRIH @puma

And in a creative genius move, models walked on study tables stretched out like a runway, guided by traditional reading lamps. Check out the finale of the show that included Victoria’s Secret models like Joan Smalls and Stella Maxwell, among others.

Supermodel Cara Delevingne did not walk the ramp, or table, but did sit front row at the show. She made an appearance sporting a new platinum blonde lob and looked extremely happy at the collection. It is said that even Rihanna’s family was in attendance.

Class of #FENTYxPUMA is sitting in the library and a very blonde, bobbed @Caradelevingne has just walked in #PFW pic.twitter.com/aGaSGDCU9e

The soundtrack to the entire show for Fenty x Puma is a bad schoolgirl’s playlist, for sure. Songs included Die Antwoord’s Happy Go Sucky Fucky and I Fink You Freeky along with Creep by Radiohead and MIA’s Bad Girls.

Finally, the lady herself walked the ramp. Rihanna donned an oversized long neon green jacket and waved to the applauding crowd as she made her way down her own runway.

.@rihanna takes her bow after taking over the French National Library for her #FENTYxPUMA show at #PFW ??❤️ pic.twitter.com/js36Pf46eo

Improve your taste in fashion and make the world your runway with the Fenty x Puma Collection.