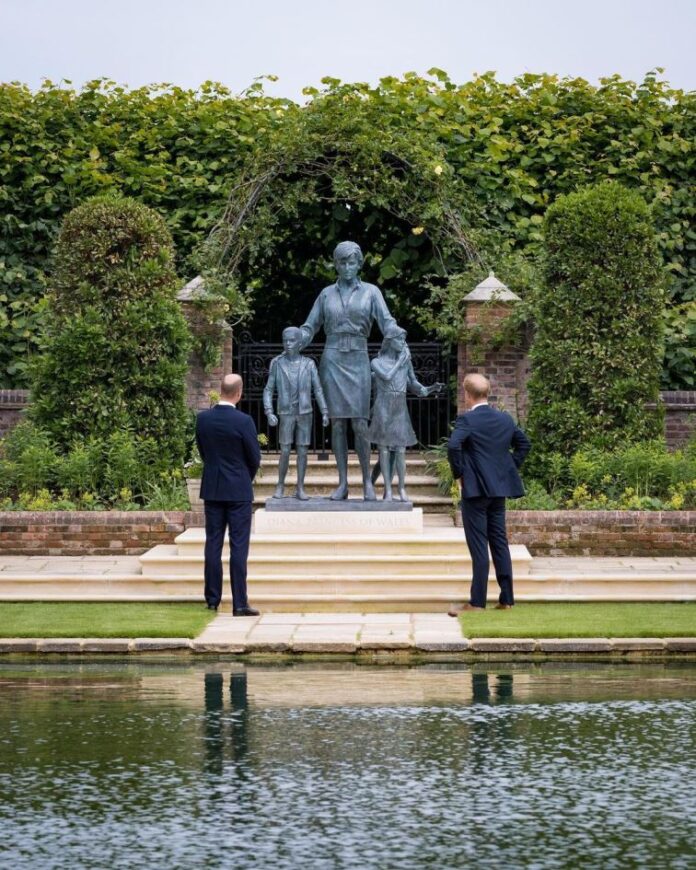 Prince Harry and Prince William came together for u veiling the statue of their late mother Princess Diana on July 1, 2021. The statue will remain as the symbol of her life and her legacy. The event marked the first public reunion of the brothers ever since the funeral of their grandfather Prince Philip in April, 2021. The brothers who might not have been in a very good terms in recent times, were seen putting up a united front as they honored their late mother at the Sunken Garden of Kensington Palace in London. The statue of Princess Diana was unveiled on what would have been her 60th birthday.

The brothers unveiled a bronze statue that was sculpted by Ian Rank-Broadley, who has shown Diana with her arms around two kids – a boy and a girl. Prince Harry and Prince William looked dapper in a navy blue suit and were seen making their way to the ceremony. Going by the body language it seemed that they were comfortable in each other’s presence.

Prince Harry was seen smiling the entire time as he chatted the entire time with brother William despite the royal family drama in recent times. The guest list for the ceremony was restricted to just 13 members due to the COVID-19 restrictions. Diana’s siblings Lady Jane Fellowes, Lady Sarah McCorquodale and brother Earl Spencer were seen attending the event. William and Harry were also seen interacting with their uncles and aunts. The statue was covered by a dark green cloth and the brothers gently slipped out the cloth to unveil the statue.

The Sunken Garden was one of Diana’s favourite places. William and Harry released a joint statement after the statue was unveiled as a tribute to Diana. The statement was shared on William and Kate Middleton’s Twitter account – Kensington Royal. Prince Harry flew from the United States to the United Kingdom after the birth of his daughter Lilibet.