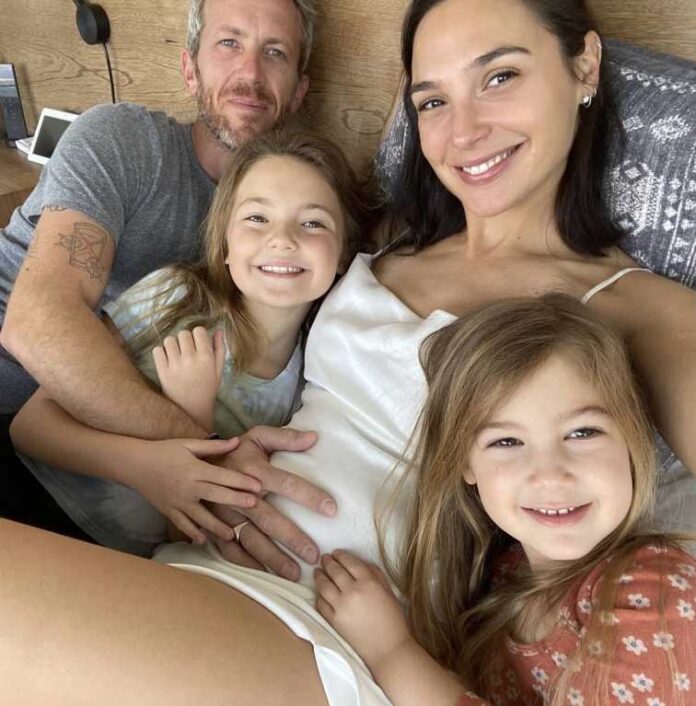 Israeli actress and producer Gal Gadot has recently announced that she is expecting her third child with husband Yaron Versano. The 35 year old actress broke the news with the help of an adorable post tar showed her husband Yaron with two daughters Alma and Maya. The husband and the kids can be seen holding her baby bump and the caption to the image says, “Here we go again”.

The news of Gadot’s pregnancy also comes as a surprise as just a few hours before the post, the actress had appeared at the 2021 Golden Globes event. Gal Gadot had worn a flowy outfit that had properly camouflaged her tiny baby bump. The actress was recently in news for her conversation with Bollywood actress Priyanka Chopra Jonas. Priyanka recently published her book Unfinished and Gal Gadot was one of the few ones who had received a personalized copy of the book.

Gal had posted the unboxing video of Unfinished and had taken it to her Instagram Stories. The actress wrote, “Thank my love @priyankachopra,”. On the work front, Gal Gadot was recently seen in the film Wonder Woman 1984 in which she was seen playing the lead. The film was directed by Patty Jenkins. Gadot not just played the lead, but was also one of the producers. Wonder Woman 1984 also starred Chris Pine, Kristen Wiig and Pedro Pascal.

The actress is now looking forward to the upcoming films Death on the Nile and Red Notice. On the personal front, Gal got married to Isreal based businessman Yaron Varsano in 2008 and together they have two daughters born in 2011 and 2017. It was in 2019, when Yaron and Gal formed their own production company Pilot Wave. The couple together also owned a boutique hotel in Tel Aviv but it was then sold to Roman Abramovich in 2015. The deal was reportedly of $26 million.