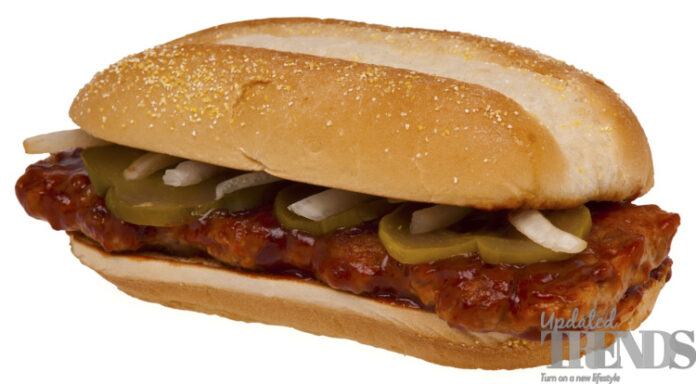 Fast food giant McDonalds is all set to bring back its popular sandwich McRib to its menu and will be available from December 2, 2020. The McRib will be available at all of its more than 14,000 outlets for the first time since more than ten years. In the recent years, the McRibs was available only in some of the selected stores, which means the availability of it was limited and was also popular among people who were fans of the ribs.

The food item was described as “saucy, tender, tangy and shamelessly delicious” when it was first launched on the McDonalds menu nearly 40 years back. Talking about the sandwich, it consists of a patty made of pork that is boneless and is given the shape of a rack of ribs and is then smeared in lip-smacking barbecue sauce and is paired with onions and pickles. The price of McRibs will vary according to the location.

Linda VanGosen, the vice president of Menu Innovation in a statement said that the McRib Sandwich has been a beloved item at McDonalds since it has been incepted about 40 years back. VanGosen added that no other food menu has been able to match with the taste of the McRib and the customers have loved it due to the taste it as always promised and its saucy texture that has always won hearts. The vice president added that this is the right season to take this off and is now taking the internet by storm.

McDonalds is all set to serve the McRibs this year with pride. It was in the year 1982 when the McRibs was introduced and the customers in Germany continue to enjoy the item all year round. Foodies across the globe cannot wait to get their hands on the limited edition menu. McDonalds menu varies across the globe according to the taste of the region.