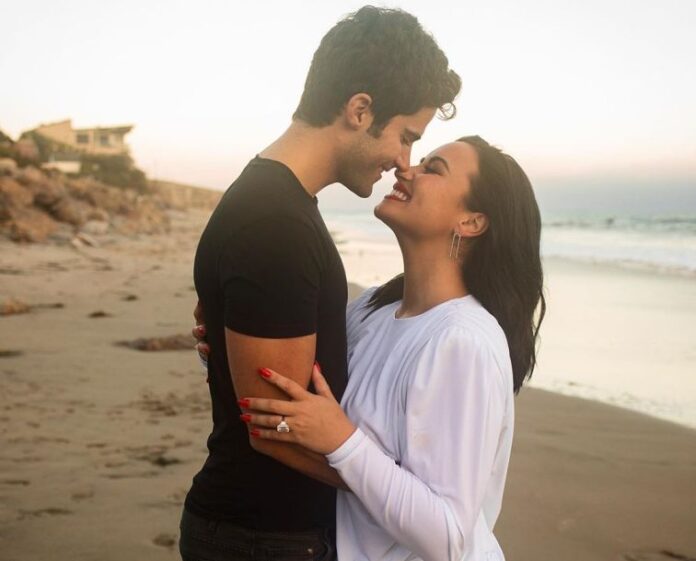 American singer and song writer Demi Lovato and actor Max Ehrish are now engaged. The couple has been dating since March 2020 and their posts on social media had spoken a lot about the chemistry between them. It was evident that the two are deeply in love and a commitment was pretty expected. Demi took her Instagram account and revealed about her engagement to Max and flaunted the huge rock on her engagement ring.

The singer in the set of pictures can be seen wearing a white outfit as she kissed her lover boy and Max was seen in a casual black t-shirt and a pair of denims. Demi and Max spent the entire quarantine together and seems like the time that they got to spend with each other gave them future ideas. The pictures from their engagement were shared by Demi and Max on their respective Instagram accounts. The singer has always had been great at words and this time too, Demi shared a heart-felt note for her fiancé and revealed about how she fell in love with Max the moment she met him.

On the other hand the 29 year old also penned a sweet note for his lady love and expressed what he felt about the singer. Max in his note was all praises for Demi and called her beautiful from inside out. The actor also expressed about his excitement and said that he cannot wait to have Demi as his wife. Max was also thankful to God to bring them together.

Demi Lovato had earlier expressed that she did not have any interest in getting in to any relationship as she has always been vocal about her abusive and strained relationship with her father Patrick. Her father passed away of cancer in 2013 and later the singer the expressed that she is open to find love with someone of any gender. The singer earlier suffered from a bipolar disorder known as Anorexia Nervosa and for that she had went to the rehab at the age of 18.