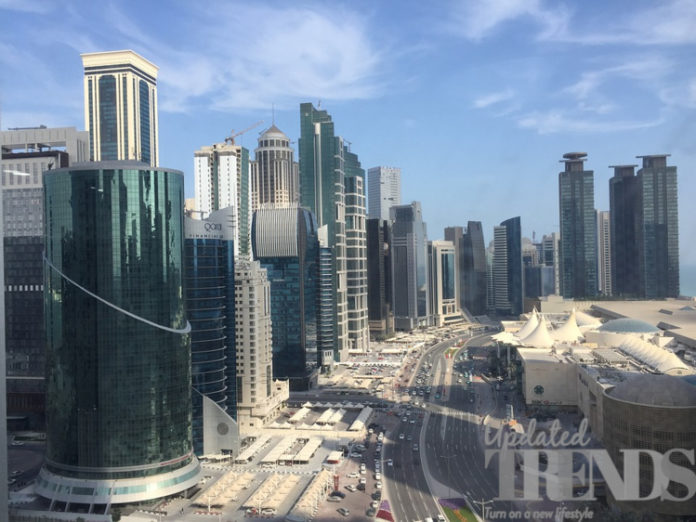 The State of Qatar is a part of West Asia and is one of the hottest countries of the world. The temperature in the country has reached about 46 C and to deal with the heat, the authorities are installing outdoor air conditioners to reduce the heat. Even the roads are being painted blue to keep them cool. Large coolers have been installed at the side of the pavements and also outside the shopping malls to make the temperature bearable for the people who are walking outside.

At the capital Doha, the Abdullah Bin Jassim Street which is located near the country’s biggest market has been painted blue completely by the local authorities which has brought down the temperature to about half. The blue color helps to reflect the hot temperature and dark roads often absorb heat, making it even more hot and unbearable. With the lighter ones, the heat gets reflected. The painting of the entire street blue is a part of the experiment for 18 months. The street has been painted blue with 1mm of thickness and has also been added with a special pigment that helps to reflect heat.

The paint also has ceramic microspheres that are hollow and help to reflect infrared radiation. Saad Al-Dosari, an engineer said that dark colors asphalt are 20 degrees higher than the actual temperature as it absorbs heat. More countries that also face similar high temperatures are also experimenting such methods to deal with unbearable heat.

Los Angeles painted the streets greyish-White which bring down the temperature to 23 F cooler that the black surface. In Qatar cold air is pumped in the pavement with the help of cooling nozzles after cold water is pumped on the streets through a pipeline. The country hardly experiences any rain in summer and due to the rise in sea temperatures, the humidity in the atmosphere increases.