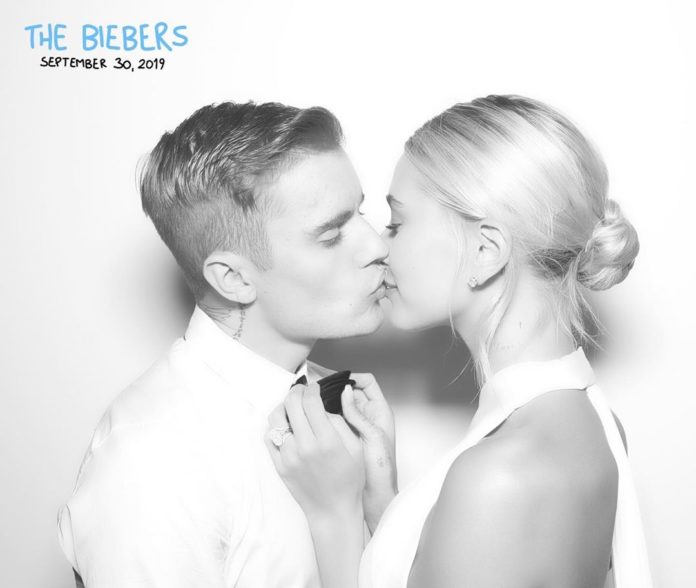 Canadian singer and song-writer Justin Bieber and Hailey Baldwin got married for the second time in an intimate South Carolina ceremony. The singer shared the first photos of the night on his Instagram account. The 25 year old posted two pictures of himself and the bride seemingly posing in a photo both. The first image has shown the bride and the groom share a kiss while Baldwin adjusts Justin’s bowtie.

The second picture has shown the 22 year old model place her arms around Bieber’s shoulders as the two pose for the cameras. Bieber captioned the images, “My bride is (fire sign),” and also included a label that read The Biebers with the wedding date. A leading daily had confirmed on September 30, 2019 that the happy couple celebrated their marriage with a ceremony that was held in front of family members and friends.

The much in love couple exchanged vows as the sun set at the Montage Palmetto Bluff in Bluffton, South Carolina. The ceremony came a little more than a year after the two first tied tied knot in the New York City Courthouse. The wedding ceremony was attended by 154 guests and included Kendall Jenner, Jourdon Dunn, Camila Morrone and Joan Smalls. The ceremony also saw the presence of Bieber’s manager Scooter Braun and his ex Caitlin Beadles and was held at Somerset Chapel. Before the wedding, the guests had enjoyed pre-wedding cocktails at the Inn lobby lounge.

After the ceremony, the guests were taken for the post-wedding cocktails ahead of a formal reception with plated dinner at the Wilson Ballroom. A leading daily had confirmed that the Grammy Award winner Daniel Ceasar was expected to perform later in the evening. Before the ceremony, Justin Bieber had shared a picture of a new Audemars Piguet watch that he had bought for the big day. The wedding was planned by Mindy Weiss and the couple had also hosted a rehearsal dinner for which the guests had arrived at the Moreland Landing venue through speed boats.