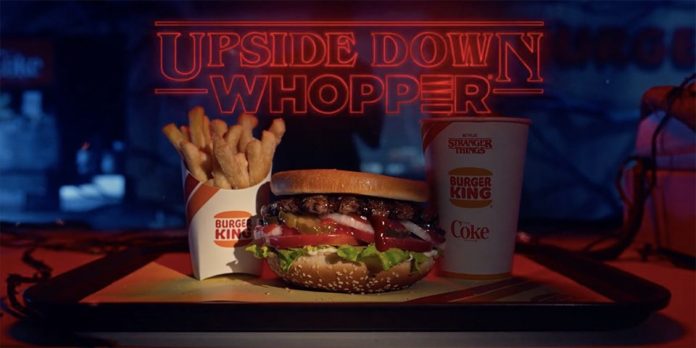 American global hamburger chain Burger King will be serving the Whoppers upside-down which is kind of a marketing opportunity. The fast food chain has joined hands with the Stranger Things of Netflix and has announced that it will soon sell an upside-down Whopper sandwich which is like a regular Whopper served with the bottom of the bun on top of a burger and the top of the bun on the bottom.

This means that it is just like a normal Whopper but upside-down. The show Stranger Things is set in the 80s that is centered around the lives of four adolescent boys and their friends. The new season is all set to premier on July 4, 2019. If the upside-down part of the promotions does not work then the nostalgia factor is expected to work. The upside down whoppers will be served with the classic packaging from the mid 80s of Burger King.

Starting from June 21, 2019, the special burger will be sold at certain restaurants in many of the US cities including Miami, Dallas, Philadelphia, Chicago, San Francisco, Boston, Houston, New York and Los Angeles. The restaurants in such cities will also have limited edition ketchup packets and t-shirts that are inspired by Stranger Things. The new promotional program has come as the competition in the fast food market increases.

Burger King is one of the Quick serve restaurants and are hyper-competitive, who fight for the same audience. It is also noticed that the customers are not loyal to one particular brand so the fast food companies come up with such odd ideas which include crazy marketing tactics or crazy food creations to attract the customers. For Instance, Burger King had last month rolled out a new Whopper meal box known as Real Meals that was labeled with different moods and colors. The food packaging came in different moods, Blue for sad, Pissed in red, Salty in teal, Yaaas in purple and DGAF in black.