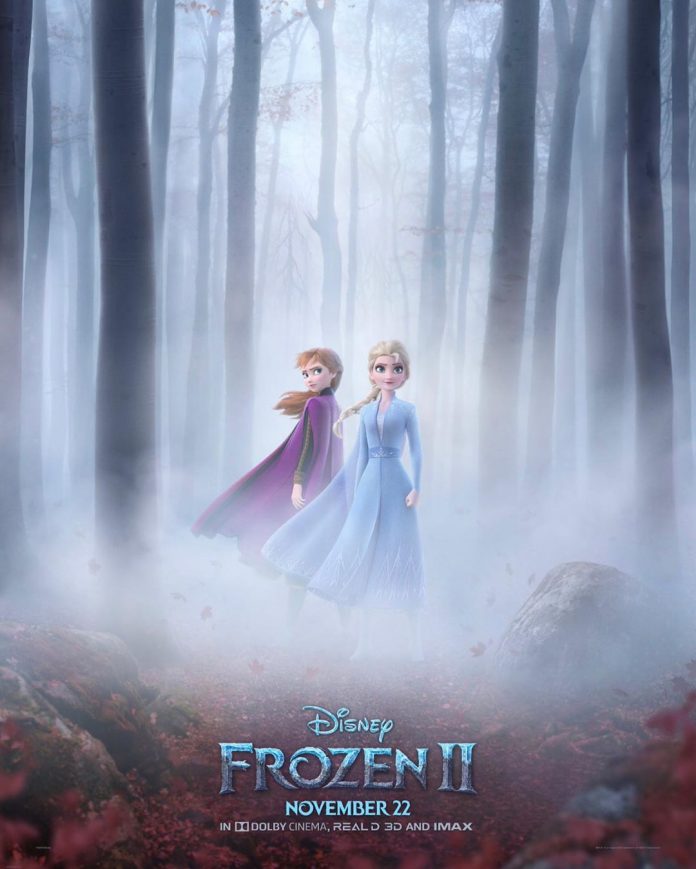 Just a day before the official trailer of Frozen 2 is released, the makers unveiled a new poster. Elsa and Anna look surely bold, graceful and fierce in the new poster. Walt Disney Pictures and Walt Disney Animation Studios are all set to present Frozen 2. After years of children screaming that cold does not bother them, a new song is all set to take over. The first Frozen proved to be an emotional watch and Frozen 2 seems like it will be a different experience.

A teaser trailer that was released a few days back had teased that Elsa and Anna’s adventurous journey goes through the dark corners of the world. The new poster has shown the two sisters Elsa and Anna standing in the woods as the cold wind engulfs them. Elsa and Anna can be seen standing without the other characters Kristoff, Sven and Olaf, while walking through the woods. Elsa can be seen in her iconic blue outfit while compared to her iconic blue gown in the first Frozen flick.

Anna can be seen standing behind her elder sister and looks at the unknown threat. The poster has also confirmed that the film will be released in English along with other languages according to the regions. The new poster of Frozen 2 has come as the official trailer is all set to be released. The sequel to Frozen is one of the most awaited films and will see Idina Menzel, Kristen Bell and Josh Gad return behind the microphones.

The new film will also see Sterling K Brown of This Is Us fame and Evan Rachel of Westworld join the returning cast. Frozen 2 is directed by Jennifer Lee and Chris Buck and is slated to be released on November 22, 2019 and can be seen in 2D, 3D and IMAX 3D formats.