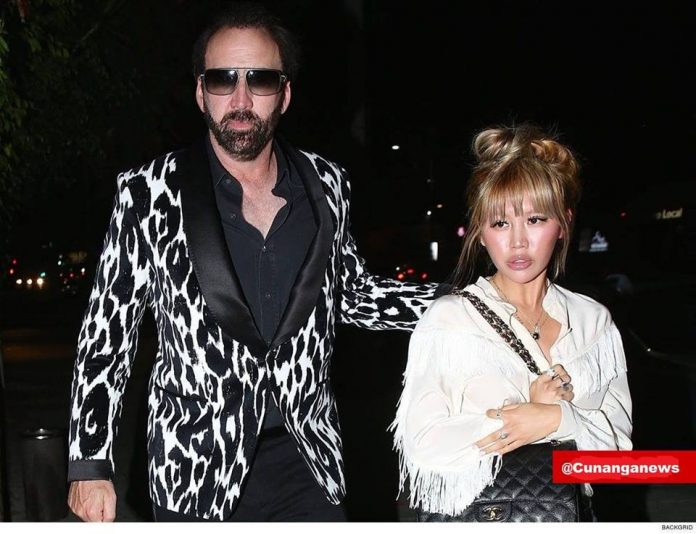 American actor and filmmaker Nicolas Cage, is now officially divorced from his fourth wife Erika Koike. The marriage lasted for just four days and the former couple was granted divorce three months after their wedding. The couple had then tried to annul their marriage after four days, after Nicolas had claimed that he was too drunk to marry.

Reports say, according to court records, the judge in Clark County, NV granted their divorce on May, 31, 2019. The 55 year old had claimed that the union was based on fraud as Erika did not disclose her criminal history and her relationship with another person. More reports claimed that there seemed to be problems with the union just hours after the wedding that took place on March 23, 2019 and were also seen fighting outside the Bellagio hotel.

Erika had reportedly opposed Nick’s attempts to annul their marriage and made a claim for spousal support. Nicolas was it seems unable to get the annulment but had managed to get a quick divorce and it is unclear of Erika was granted the spousal support that she wanted. The American professional make-up artist had claimed that her reputation was damaged by Cage and she lost out many career opportunities. The 34 year old had also agreed that they should be divorced but said that Nicolas’s annulment request must be denied, while claiming that his allegations that the marriage was based on fraud are false.

Koike said this less than two weeks after Nicolas Cage had filed for annulment and he had contacted her to rekindle things in the right way. The couple had dated for a year before their quick marriage was conducted in Vegas. They got married on the same day they had applied for a marriage license but Cage had made a scene at the Clark County Court House Marriage License Bureau. An eye witness told that Nicolas was most likely drunk.