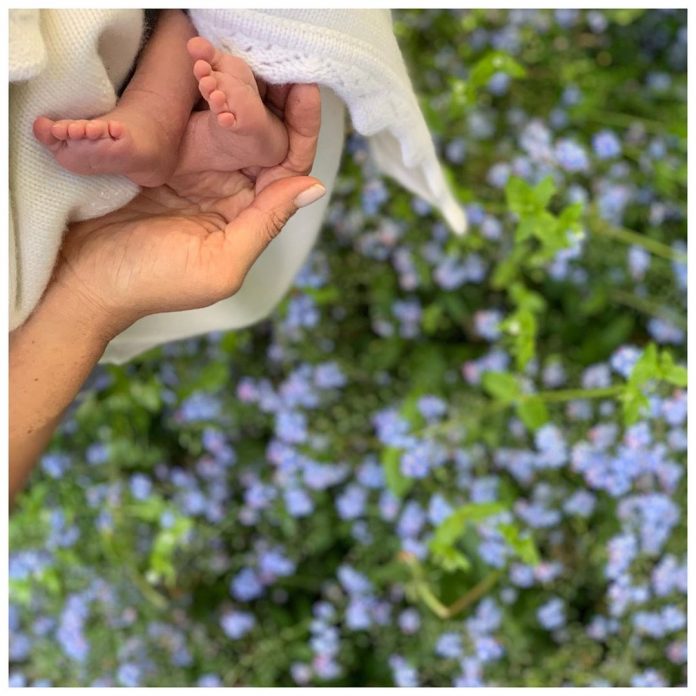 The Duchess of Sussex, Meghan Markle gave birth to a baby boy on May 6, 2019, who has become the seventh in line to the throne. Prince Harry along with his son Archie Mountbatten-Windsor and wife Meghan appeared for a short interaction with the media to introduce their son. The former Hollywood actress then shared an adorable picture of her son Archie on the social media which grabbed 1.7 million likes since it has been shared online.

The Duchess celebrated her first Mother’s Day on Sunday which was just six days after the birth of her son. The picture has shown the little one in a white blanket with just the feet visible. The background has shown blooming forget-me-not flowers. Many of the internet observers have said that they were Princess Diana’s favorite flowers. The caption reads, “Paying tribute to all mothers today – past, present, mothers-to-be, and those lost but forever remembered”.

The world got the first glimpse when Harry and Meghan posed with their son at St. George’s Hall at Windsor Castle four days back. Archie is the Queen’s eighth grandchild and the seventh in line to the British Throne. Meghan’s engagement with Harry was announced in November, 2017 by Clarence House and Kensington Palace.

Meghan Markle soon announced that she would retire from acting and then began the process of becoming a British citizen. Then started the preparation of the wedding and the former Hollywood actress was baptized by Archbishop of Canterbury, Justin Welby and confirmed her in to the Church of England on March 6, 2018. The private ceremony was performed with water from the River Jordan and took place at the Chapel Royal at St. James’s Palace. The Royal wedding ceremony was held on May 19, 2018 at St. George’s Chapel, Windsor Castle. Harry and Meghan skipped the traditional public appearance after giving birth, that was earlier followed by Kate Middleton and Prince William.