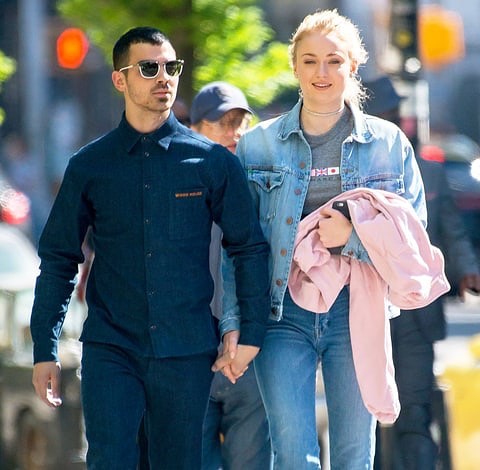 American singer Joe Jonas and English actress Sophie Turner are now man and wife officially. The couple straight headed to a Las Vegas Chapel to get married soon after they attended the Billboard Music Awards 2019. Joe and Sophie had surprised everyone with their appearance at the Billboard Music Awards which saw Joe and his brothers perform at an awards show for the first time since their reunion earlier this year. No one had even imagined that the stars would get married soon after the event.

Reports said that they obtained a marriage license on May 1, 2019 and it was DJ Diplo who took a footage of the wedding. Diplo had gone live on the photo sharing site Instagram and showed the couple reciting their vows in front of an Elvis impersonator. Sophie looked gorgeous in a white bridal ensemble with a veil. During the wedding ceremony, country stars Dan + Shay played their track Speechless. Going by the pictures it seems that they got married in a local wedding chapel.

Joe Jonas and Sophie had announced their engagement in October 2017 and got engaged after dating for about a year. Sophie had posted a picture of her engagement and wrote, “I said yes”. The actress in the picture had flashed her huge diamond ring. The couple had earlier talked about their wedding and had then informed that they would have a summer wedding. Joe had revealed about it on The Late Late Show with James Cordon and had then said, “We’re getting married this year. We’re going to have a summer wedding.”

The couple was also seen together at brother Nick Jonas and Priyanka Chopra’s bit fat Indian wedding held at Jodhpur, Rajasthan in India. Priyanka in one of her Instagram posts had expressed her wish to see Sophie as a bride and now it seems like her wish has come true.