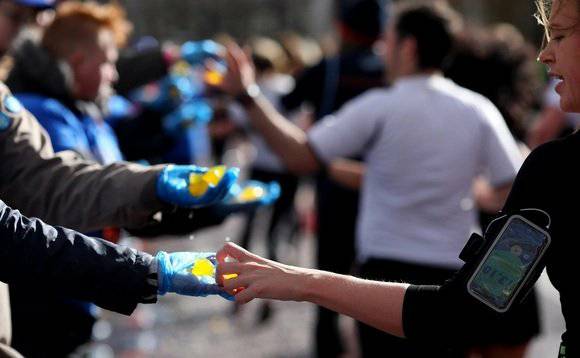 The London Marathon saw thousands of edible water bottles in an attempt to reduce plastic waste on April 28, 2019. It has been observed that after Marathon, it results in thousands of plastic waste as thirsty runners try to stay hydrated by drinking from bottles which are later discarded. But the organizers of the 2019 London Marathon thought of an innovative idea and arranged for edible water bottles that were made of seaweed extracts as they dealt with the long 26.2 mile route.

The water pouches were made by a London-based start up known as Skipping Rock Lab and were made using a thin natural seaweed membrane. The water pods have been christened as Ooho! Capsules and can be bitten to release the liquid inside and the cover can also be swallowed. It does not matter if the runner does not wish to eat the casing as they have the option to throw it on the floor as the pods have been designed to biodegrade within six weeks compared to the 450 years that it takes for plastic bottles to decompose.

Rodrigo Garcia Gonzalez, one of the founders of the startup said, “The marathon is a milestone … we are hoping we will demonstrate that it can be used at scale in the future”. However, this year’s marathon was not completely plastic free as water bottles were available at the shops along the route. The initiative was to reduce the unnecessary plastic waste and the organizers assured that all water bottles that were handed out will be at least partially made of recycled plastic and that all the water bottles that are discarded will be collected and recycled.

The organizers are making more efforts on finding ways to recycle them more effectively. With the help of the closed loop system, the plastic bottles that are collected from the venue will be returned directly to a reprocessing plant where they will be recycled in to new bottles.