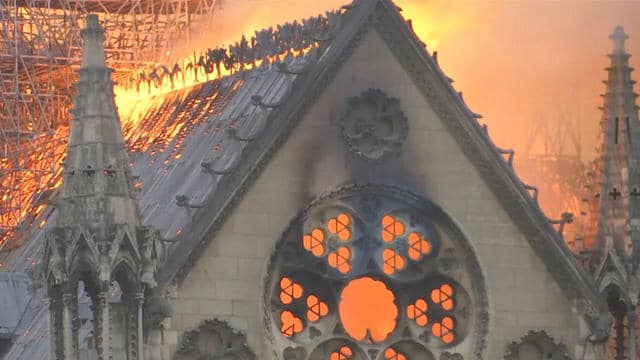 Architects who are working on preserving the famous Notre-Dame are rushing to cover the cathedral before the rainy season begins and does further damage. The threat to Notre-Dame has increased as there are showers and even thunderstorms in forecast of Paris on April 23, 2019. The vault of the cathedral partly collapsed in the recent fire and is already water logged due to the fire-fighting efforts. The architects have feared that heavy rainfall could result in further collapse.

Philippe Villeneuve, the chief architect of Notre-Dame, while talking to a leading daily said that erecting an emergency tarpaulin was the highest priority. The architect added, “The beams are there, the tarpaulin is arriving. The climbers, since it will be climbers who will do that, and the scaffolders, are ready”. Plans are already in place to make a large purpose build umbrella on the roof of the landmark which will have its own peak and will also protect the structure while the reconstruction takes place.

However, the concern is that the umbrella is not ready and the threat of an impending rain is too serious to wait. There are also reports of heavier rain forecast for April 25, 2019. There were also fears that the 800 year old structure would be completely destroyed during the fire blaze on April 15, 2019. Courtesy to the firefighters who managed to save the structure and much of its interior. Still the emergency work has been taking place since then to stabilize the building.

The most obvious damage is the three large holes in the vault of the cathedral and its arched ceiling. The famous rosette stained glass windows have been covered with protective material and have been reinforced with timber posts. Emmanuel Macron, the French President has assured to rebuild the symbol of Paris within five years during the time of Olympics in the city scheduled for 2024.