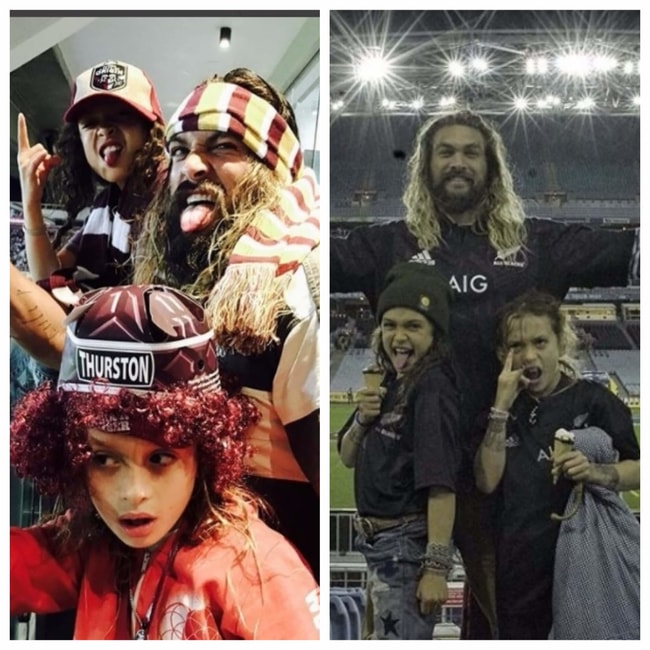 Jason Momoa of Game of Thrones and Justice League fame reportedly opened up in a recent interview with Men’s Health about his marriage and his life after kids. He said that he is working towards being a good father after he had two children, Lisa Bonet and Lola and Nakoa-Wolf with his wife Lisa Bonet. He said he has found real meaning to life after he had children.

The actor was quoted saying, “I really can’t tell you what the hell I was doing before I had kids.” He further admitted to being “pretty reckless and definitely a bit out of control. “I probably love myself more and take care of myself more because I want to stick around.”

However, the former Game of Thrones actor who played the epic, Khal Drogo could not have enough of being a father to the kids. He said to the magazine, “My kids are my greatest piece of art. If I can pump them full of amazing stuff and surround them with beautiful art and music, then I’m going to live out my life watching them. They’re already way smarter and just way better than me. God, I love it. It’s beautiful. I want it to be the greatest thing I ever do: make good humans.”

My lovees. My all blacks. My popcorn Happy papa. #missumama @allblacks Aloha j

The Justice League resident even wants to learn more on how to be a better parent and suggested if in a get together, other fathers can also join in and share their opinions and experiences on “being a good dad.” He wants the meeting to create something positive and help everyone understand what being a parent means to each one of them, irrespective of the stereotypes of a patriarchal society.

Momoa summed a parent’s daily struggle: “Sometimes you don’t learn it from your parents. You learn it from your best friends,” he said. “Instead of just, ‘This is what a man’s supposed to be’, you can make something really positive. The truth is we’re all searching. We’re all looking for guidance, for mentors, and I’m by no means someone to follow.”

The Aquaman star has given a glimpse into his personal life and how he reached stardom and how his life changed after parenthood in a previous video, “Canvas of My Life”. His relationship with his kids has been brought to the fore in this video as he teaches them interesting activities like skateboarding that he is passionate about.

His recent Instagram post too defines how sweet and endearing a father’s relationship can be with his kids. The post was captioned on Elton John’s song, “I simply love you more than I love life itself.”

“I simply love you more than I love life itself” listening to Elton with the loves of my life. Raising sensitive savages Priceless day on set proud to be aqua papa. OHANA

On the work front, Momoa’s latest film, Justice League is slated to release in theatres on November 17, 2017 while Aquaman will hit the screens on December 21, 2018.

Men’s Health mag’s cover boy, Momoa also attended the premiere of Justice League and was at the red carpet event in Los Angeles for the first time with his wife Lisa Bonet on Monday, November 13, 2017 where both were seen with their wedding rings.

Momoa and Bonet secretly married each other in October after dating since 2005. Momoa reportedly confirmed his marriage to longtime girlfriend, Bonet recently.