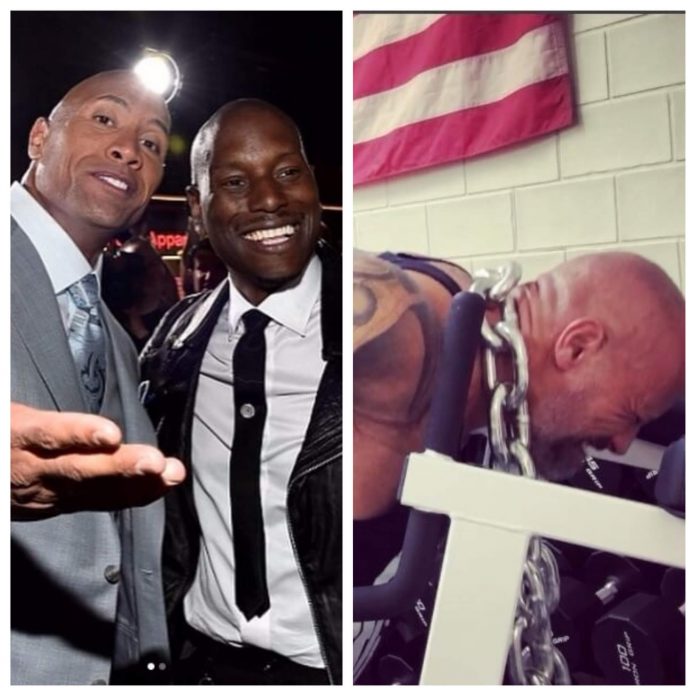 The Fast and Furious family feud seems to not end anytime soon. With a Fast and Furious Luke Hobbs’ spin-off starring Dwayne Johnson and Jason Statham that led The Rock to push Fast and Furious 9 – the ninth film of the successful franchise by a year. The feud that had once started off with comments from Johnson about his F&F family claiming them to be “candy asses” has now become direct and public with Tyrese Gibson taking digs at Johnson by calling him a “clown” and blaming him squarely for the delay in the ninth film’s release. Vin Diesel too subtly but firmly talked about the feud on social media.

In a recent interview with TMZ, Gibson further called Johnson “selfish” to have entertained the spin-off over the 16-year-olf Fast and Furious team’s association.

“I don’t know what they’re doing. Everybody’s coming at me, like I’m hating on Dwayne for his spin-off. I’m not. I just wish he was releasing it at a different time. It’s not a conflict, but Fast & Furious is like a holiday. The Fast & The Furious family, the fans, the tribe, the people who have been rocking with us for 16 years… you know, pushing our release date back… it’s only happened one time in the history of The Fast & The Furious (franchise), when we lost our brother Paul Walker. So, what’s the reason we’re pushing the release date back now? I’ve just got a problem with Dwayne… it appears that he’s being selfish.” He further added, “It appears that he’s so focused on furthering his own self-interests that he’s making decisions from the seat that he’s sitting in. Fast & the Furious 9 isn’t coming out until 2020.”

Johnson presumably as a response to the interview took to his Instagram account to post a teaser on Monday, October 9, 2017, from the spin off that is scheduled to release on July 26, 2019 while Fast and Furious 9 has been postponed from April 2019 to April 10, 2020.

Daddy’s gotta go back to work ~ Hobbs. Pumped to expand and build out the FAST & FURIOUS universe in a cool, exciting way with our @sevenbucksprod, writer/producer Chris Morgan, producer Hiram Garcia and lead producer and my bigger twin, Neil Moritz. Thank you UNIVERSAL STUDIOS for being tremendous partners who see the big picture and for coming to us years ago with this spinoff idea. Huge shout to my brother, Jason Statham for the trust and wanting to create and deliver something fresh and bad ass for the fans. I have a tremendous amount of respect for this franchise that I’ve enjoyed droppin’ blood and sweat in over the years and my vision is to create greater opportunities for not only my fellow FF cast mates, but for other amazing actors as well who want to be a part of something new and cool. I want to use my spinoff platform to create new characters that fans will ultimately love to have fun with in multiple chapters and platforms. Film, TV, Digital, Virtual Reality etc.. the more opportunities we can create the better for the fans. Smart business. Let’s have some FUN and to quote, Hobbs the boss, if you don’t like it, we’re happy to beat that ass like a Cherokee drum. #HOBBS #SevenBucksProds #NewOpportunities #CandyAssesNeedNotApply JULY 2019

Over the weekend, Diesel came up out front to speak about the feud and cool down the heat by saying, “I know there has been a lot of speculation as to why the Fast 9 release date was pushed… but it would be unfair to say it is anyone’s fault.  As we plot the course to expand the Fast & Furious universe, one must be mindful to take stock of the roads we took to get here. The pillars of authenticity, family and most importantly, our loyal fan’s perspective has been instrumental in procuring success.” He also added that the film franchise needs some “maintenance” and also thanked Universal studios’ head, Ron Meyer for giving him more time to think through the future of the franchise.

Diesel has also clarified that the “brotherhood” between him and Jonshon has been complicated and seems to have refuted Gibson’s idea that The Rock has betrayed the Fast and Furious family and is completely responsible for the ninth movie release date to be postponed by a year.