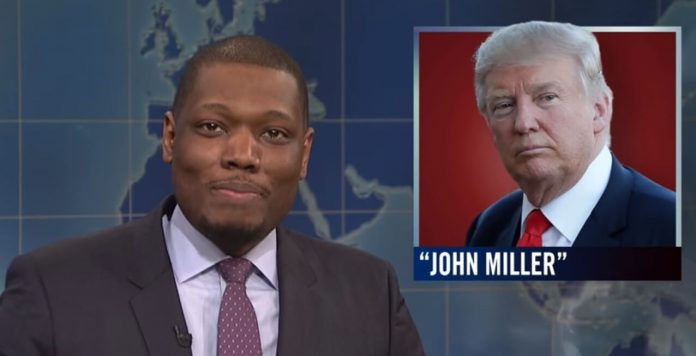 Targeted racism can come at an unexpected time and from unexpected sources. Saturday Night Live (SNL)’s popular comedian Michael Che is the latest victim to online racism attacks by US President Donald Trump’s supporters who took it upon them to humiliate, embarrass, name call and do more to express their racist views on Che as he sarcastically lambasted Trump on his measures related to the Hurricane-affected areas and victims, especially for the president’s comments on hurricane-swept areas in Puerto Rico.

What mostly prompted the racial bias to appear was Che calling Trump a “cheap cracker”, inviting his attention to the pressing issues of offering financial help to people inflicted with the storm catastrophe instead of trivializing and belittling the problems faced by the people in Puerto Rico, post Hurricane Maria struck in the Caribbean Island.

On this weekend’s SNL show, Che rebuked Trump saying, “Oh, really, Donald? You b***h. Was she nasty to you? How nasty? Are you shaking? This isn’t that complicated, man. It’s hurricane relief and people need help. You just did this for white people — twice. Do the same thing: Go tell Melania to put on her flood heels, get some bottled water, some food, pack up some extra Atlanta Falcons Super Bowl T-shirts, and write them a check with our money, you cheap cracker.”

A couple of hours later, Che’s Instagram feed showed the kind of hate comments and trolls that his phone had been flooded with.

Michael Che – POTUS is a “bitch”, “cheap cracker”. Where is the racist label, call for firing, MSM outrage, & demand he never work again?

Name calling from the left is allowed. It is disguised as entertainment & swallowed like dessert while they all pat themselves on the back

To all liberals, if ur not mad because Michael Che from SNL called TRUMP a “cheap cracker”, then I don’t want to hear about Trump’s comments

To all liberals, if ur not mad because Michael Che from SNL called TRUMP a “cheap cracker”, then I don’t want to hear about Trump’s comments

Meanwhile, Trump on his first visit to the island on Tuesday, October 3 was quoted by a news website saying:

“If you look at the — every death is a horror, but if you look at a real catastrophe like Katrina and you look at the tremendous hundreds and hundreds of people that died and what happened here with a storm that was just totally overbearing. No one has ever seen anything like that. What is your death count?”

Trump not only said that Puerto Ricans have not faced a serious catastrophe even after power cuts, blackouts, lack of food and supplies and medicines and insufficient facilities in hospitals; he further stated, according to reports, that the US government has spent a “lot of money in Puerto Rico” and addressed the island saying it has been “throwing our budget out of whack.” He even said that the death toll is nothing compared to what has happened in hurricane Katrina-affected areas in the States.

“You can be very proud. Sixteen versus literally thousands of people.” The death toll however was recorded to be 34 later, reports the New York Times.

It seems like Che called Trump a racist to have ignored Puerto Ricans relief efforts while providing relief to victims in Texas and Florida, and people could not forget and forgive the ‘Weekend Update’ episode. It was reportedly the second most watched premiere since 2010. However, Trump administration rants are quite popular on SNL seasons. Recently, Alec Balwin took home the Emmy Art Awards for his impersonation of the ardent golfer, Trump in the last season of the comedy series.