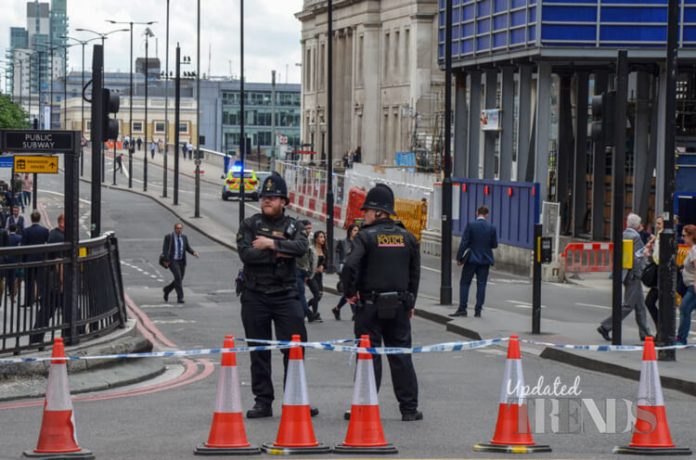 London subway carriage commuters were in for a horrific experience on the early morning rush hours on September 15, 2017 – the crowded train reportedly caught fire and an explosion ensued as stampedes and panic grabbed the commuters who were desperately trying to escape the situation at the Parsons Green tube safely. Police suspects it to be a terror attack, just like the previous terrorist – inflicted mishaps the city has braved over the past few months.

The underground district line of the Britain capital have reportedly shown a plastic bucket that was packed inside a shopping bag and kept on the floor of the train – the bucket was seen in flames on one of the carriages as wires came out at the surface. 18 people have been hospitalized so far according to the latest reports which even state that some have suffered facial burns. Currently, the southwest area of the city is under strict vigilance and the authorities believe it is best for the people to avoid the area for now.

If reports are to be believed, commuters claimed that many among the crowd travelling in the ill-fated subway train were school children who faced major difficulties in finding their way out of the packed transport system as people were shouting and screaming in panic.

Ambulances were sent soon to the subway station along with several crew members who helped the commuters evacuate the train. The police armed with their weapons and a bomb squad were deployed at the scene. The Metropolitan’s Counter Terorism Command is reportedly investigating the incident and until that happens, the train services on the line have been disconnected.

I’m safe – just had to run for my life at #ParsonsGreen station – huge stamped, lots injured. Not sure why – fire/explosion mentioned. pic.twitter.com/zRvRPWOuzA

UK Prime Minister Theresa May sent her thoughts to the injured commuters from the train on her Twitter account:

PM: My thoughts are with those injured at Parsons Green and emergency services who are responding bravely to this terrorist incident.

US President Donald Trump posted a tweet condemning the perpetrators:

Another attack in London by a loser terrorist.These are sick and demented people who were in the sights of Scotland Yard. Must be proactive!

The city has become a terror-prone place off late with recent attacks near north London at a mosque in Finsbury Park, on the famous Westminster Bridge and London Bridge and even near the Parliament since early this year. Perpetrators in the previous terrorist attacks in London have been seen using knives and vans to carry off their menacing act. Packed areas seem to be the areas maximum targeted by the terrorist assailants. Even concerts have not been spared. Recently, in the month of June 2017,  at US pop star, Ariana Grande’s Manchester concert, a bomb detonated and affected people even 20 metres away and there was the presence of suicide bombers too which reportedly led to a massive destruction that is deemed as one of the most brutal terror attacks since July 7, 2005 bombings in the city, killing 22 people.