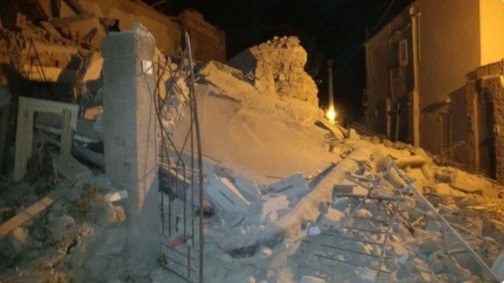 A few days before the fateful day when almost 300 people were killed in an earthquake in central Italy last year, an island in the European country has again been wrecked by the quake that took place at night on Monday, August 21, 2017.

August 21, 2017 also marked the total solar eclipse which covered the entire United States of America, a big natural event that took place after 400 years. However, the quake’s occurrence at the island in the Gulf of Naples at the very time when the eclipse was witnessed in another part of the world is a hard-hitting coincidence.

The island, Ischia that is heavily flooded with tourists at this time of the year suffered loss of property to a huge count while at least two lives have reportedly been lost, and others remain injured or trapped in the debris.

Three young brothers of ages 11 years, eight years and seven months respectively have been rescued from the rubble with the eldest one reportedly rescued just a couple of hours back. The rescuers were constantly communicating with the children which is why they felt confident of being able to save the brothers. The infant’s survival is since being called “a miracle” as he was alive even beneath the rubble for several hours.

People dreaded tremors and after-effects of the quakes and several of them ran towards the roads as the island was blackened out, while tourists planned on cancelling their further stay in the island by reaching the ports. Many are reported to have become homeless and displaced too.

While the magnitude of the seismic waves have been reported to be 4.0 on the Richter scale by Italy’s National Institute of Geophysics and Vulcanology, the European and US seismology agencies have noted the magnitude to be an estimated 4.3.

About 40 people are reported to be injured as a result of the quake out of which more than 20 people were being treated for minor injuries, a doctor at a local hospital of the island has been quoted claiming by Sky TG24 television.

Rescue operations with ferries, helicopters and civil protection groups have been on the job since the incident took place where one woman died when she was struck by the rubble of her own house while another lost her life when a church fell down upon her. Both women died in the region of Casamicciola, the northern part of Ischia and the most affected area in the quake.

While patients have reportedly been flown out of an affected hospital, additional ferries have been brought to the island for people who intend to leave the island immediately.

So far six buildings and a church have been shown in the television to collapse due to the quake while more rescue squads and dogs trained for rescue operations arrived as there are still people who have not been found event though the collapsed buildings were all inhabited.

Popular with tourists for its natural landscapes and hot springs, Ischia has a dense population of 60,000 people, many of whom were at restaurants, hotels, bars or enjoying their meals in the comfort of their home when they experienced the horribly frightening quake. This incident is a prompt reminder of 1883’s massive earthquake in the island of 5.8 magnitude that saw more than 2000 people die.