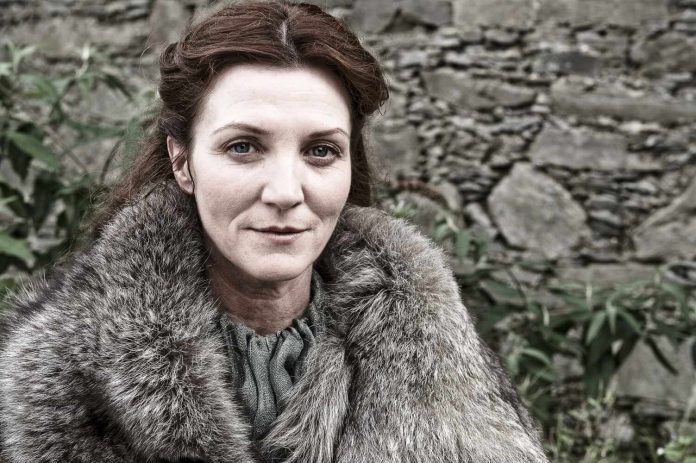 Fans of HBO’s Game of Thrones, you are the real MVP. It’s like with each episode, every inch of the screen is scrutinized, every second of each scene is dissected. And brilliance comes from it. Here is another theory created by a fan of the hit series: the ghost of Catelyn Stark is in Winterfell. How did the fan come to this insane conclusion?

If you remember Game of Thrones Season 7 episode, The Spoils of War, Arya Stark has returned to Winterfell. She gets into a duel with Brienne of Tarth, while Sansa Stark and Littlefinger look on in wonder. While viewers were deeply in awe of Arya’s sword play, that she picked up from Syrio Forel and the Faceless Men, they missed out on one astonishing moment.

Reddit user GrennsGal points out that at exactly at the moment when Arya “mother” to Brienne in the sentence: “Didn’t you vow to serve both my mother’s daughters?” that a figure robed in deep green with auburn hair walks past in the background. It eerily looks like the Lady Catelyn Stark, you have to admit.

Again, while Arya and Brienne are duelling, the same figure walks by once more, head bent.

Got the chills? Winter is here!

In the book series A Song Of Ice And Fire by George R R Martin, Cat is murdered at the Red Wedding and dumped in a river. She is resurrected by Beric Dondarrion as Lady Stoneheart, a zombie who vows revenge against Walder Frey and her foes. The books also mention that she kills the young Podrick Payne, who is present during that famous duel scene in The Spoils of War. The author himself had once said how he was bummed out by the fact that Game of Thrones creators David Benioff and D B Weiss eliminated that whole scenario. Also, in the opening scene of Season 7, Arya does the deed on behalf of her mother by killing off the entire Frey household.