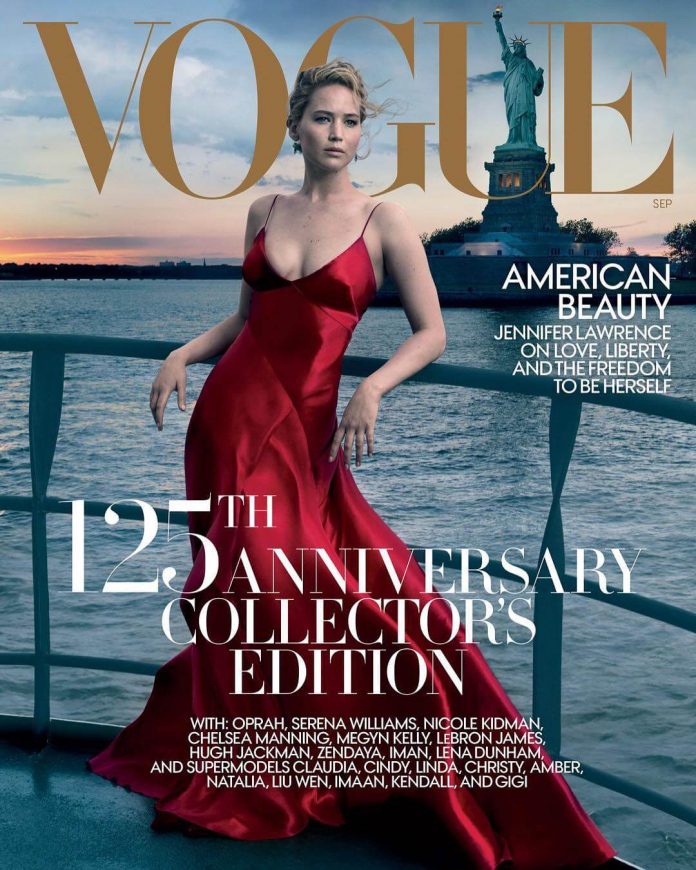 Oscar-winning actress and everyone’s relatable imaginary BFF, Jennifer Lawrence is on the cover of Vogue’s September issue! Shot by critically acclaimed photographer Annie Leibovitz, JLaw stuns in a red dress as she gazes into the lens. There is so much we want to know about this extremely private and super talented star, and the usual open book dished it out with every question she was asked.

First off, there’s her 2016 surprise box office fail, Passengers that she starred in opposite Chris Pratt. The story itself was promising, but critics pointed out the opening scene where they felt it was erroneously shown that Pratt wakes up first, instead of Lawrence. She is quick with her rebuff. “I’m disappointed with myself that I didn’t spot it. I thought the script was beautiful – it was this tainted, complicated love story. It definitely wasn’t a failure. I’m not embarrassed by it by any means. There was just stuff that I wished I’d looked deeper into before jumping on.”

The next thing that everybody wants to know is the status of her relationship with Black Swan genius Darren Aronofsky. After photographs emerged of the two grabbing lunch together, then locking lips and even sharing a lollypop (say what you will, but that one is still gross), Jennifer Lawrence will next be seen on the big screen in Aronofsky’s Mother!. The trailer for the psychological thriller is already garnering critical praise. “When I saw the movie, I was reminded all over again how brilliant he is. I normally don’t like Harvard people, because they can’t go two minutes without mentioning that they went to Harvard… he’s not like that. I’ve been in relationships before where I am just confused. I’m never confused with him.” Lawrence has previously dated her X-Men co-star, Nicholas Hoult and was rumoured to have briefly dated Coldplay frontman, Chris Martin.

And last but not least, there were several reports about Jennifer Lawrence starring in a film with her BFF, comedienne Amy Schumer. They are working on the script and have approached a number of directors. She says the plot is “about dysfunctional twins. But it’s sad. Then it’s funny.”