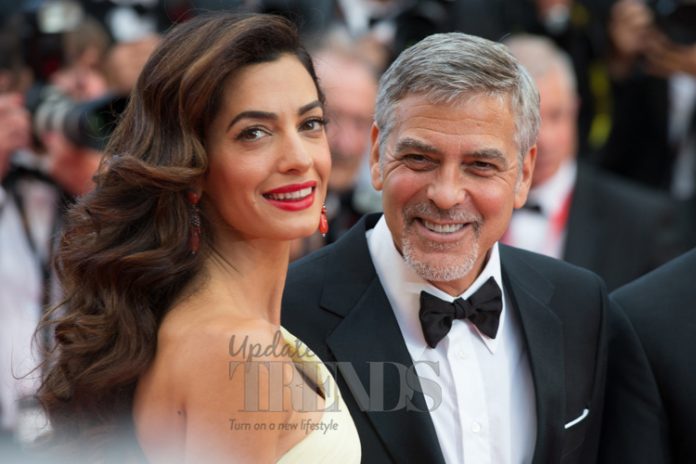 George Clooney and wife Amal are currently blissed out after the birth of their twins. Fraternal babies, Alexander and Ella, along with their parents are currently staying together at Clooney’s lavish estate at Lake Como, Italy. While the parents have done everything they could to keep their babies away from the spotlight, it seems the paparazzi have no understanding of boundaries, and have this time infuriated a usually calm George Clooney.

Voici, and Italian tabloid house, is said to have sent their photographers to Clooney’s mansion. There, they breached the boundary walls and managed to take photographs of the parents holding their babies. Then, they had the audacity to share the cover image for their upcoming issue, proudly stating, “the very first pictures of the twins in the arms of their parents. Do not miss all our exclusive photos.”

George Clooney issued a statement to a popular US tabloid, with a message directly to paparazzi, and Voici in particular. In the statement, the dapper star said, “Over the last week, photographers from Voici magazine scaled our fence, climbed our tree and illegally took pictures of our infants inside our home. Make no mistake – the photographers, the agency and the magazine will be prosecuted to the full extent of the law. The safety of our children demands it.”

Italian tabloid magazine Voici also issued a statement of their own, where they shamelessly justified their actions, saying, “George and Amal Clooney have been very public personalities for the last few years. Their wedding in Venice, in September 2014, was a very mediatic event; the pictures of them smiling to the public were seen all around the world. The birth of their twins, Ella and Alexander, has also been commented a lot, by themselves and their families. The images published in Voici this Friday are a response to a public demand. People love George Clooney and have been following his life for years now. Those pictures do not put in danger Mr. Clooney, his wife or their kids.”

George and Amal welcomed Ella and Alexander on June 6. At the time, they issued a joint statement, saying that their twins were fine and healthy. Their families also had stated that they are more in love than ever, and are enjoying just being with their newborns and not doing much else.