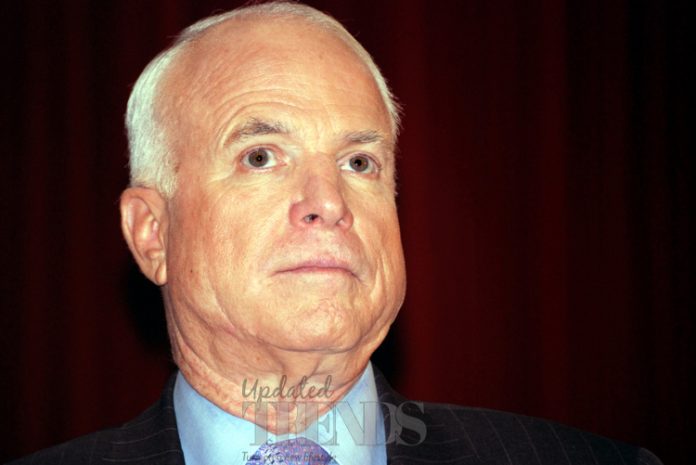 Arizona state Senator John McCain is reported to have been diagnosed with brain cancer. As confirmed by his spokesman, the longest-running Senator in the United States is suffering from a brain tumor, known as glioblastoma. McCain was admitted to the Mayo Clinic where he had the tumor, along with a blood clot above his right eye removed. He is currently in remission, according to the spokesman.

The 80-year-old Senator, a former US Presidential candidate is doing well. Sources close to him said that he was doing very well after he awakened from surgery, and his memory was sharp as ever. He is also said to have requested to go straight back to work, though doctors have asked that he rest for at least a week before he resumes his position in public office.

The Mayo Clinic said in a statement: “The senator and his family are reviewing further treatment options with his Mayo Clinic care team. Treatment options may include a combination of chemotherapy and radiation. The senator’s doctors say he is recovering from his surgery ‘amazingly well’ and his underlying health is excellent.”

Due to his brain tumor removal surgery, John McCain missed the important Senate Republican bill to repeal and replace the Affordable Care Act (ACA), popularly known as Obamacare. However, the voting has been delayed till he returns back to office. It is yet uncertain whether he will return to the US Senate as a representative for Arizona.

President Donald Trump made a statement in support of McCain, even though in the past he had made derogatory statements against the former Vietnam POW. “Senator John McCain has always been a fighter. Melania and I send our thoughts and prayers to Senator McCain, Cindy and their entire family. Get well soon.” The President added, “We hope John McCain gets better very soon because we miss him. He’s a crusty voice in Washington. Plus we need his vote. And he’ll be back.”

Barack Obama, against whom John McCain ran as Presidential candidate back in 2008 also expressed his concern on Twitter, saying: “John McCain is an American hero & one of the bravest fighters I’ve ever known. Cancer doesn’t know what it’s up against. Give it hell, John.”

John McCain is a third generation war veteran who served in the US Navy during the Vietnam War. He was captured and imprisoned in what was dubbed as ‘Hanoi Hilton’ as a prisoner of war (POW), where he was tortured and isolated in solitary confinement for five and a half years. After his return, he continued to serve his country and still bares the brunt of his imprisonment, with him being unable to raise his arms over his head.