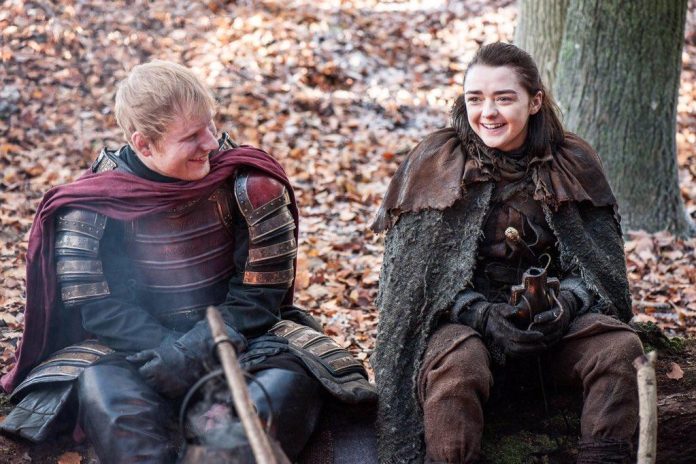 After waiting for forever and a day, finally, fans were treated to the season premiere of HBO’s Game of Thrones Season 7 on July 16. Yes, there were remarkable moments and we got to see our beloved Mother of Dragons again, but there was one person who made more than just a cameo appearance on the hit show. It was, yes, Ed Sheeran.

The redhead singer met with Arya Stark while she traversed on her way in the woods. He and his men shared their meat and mead with the Stark girl. And the Shape of You singer even got to use his pipes on the show, impressing the former “girl with no name”. While there were a number of appearances throughout the show, and still more to come, Twitter was not happy with Ed Sheeran making his acting debut on Game of Thrones.

For one, no one wanted to visit an Ed Sheeran concert in the woods when we’ve been waiting a whole year to re-visit the Seven Kingdoms. What we’re more interested in is the White Walkers and mad Queen Cersei upon the Iron Throne. Also, Sheeran had little to no lines, and his appearance involved him shaking his head to all the fascinating stories told by Arya while eating rabbit.

Ed Sheeran looked very out of place in Westeros. His fiery red hair doesn’t go with the foliage of the land, and it seriously made him look unbelievable in armour. People were not happy to see him, especially in the season premiere, and poked fun at HBO for trying to gather ratings when the show is already so popular. Here’s just a gist of what Twitter had to say –

Ed Sheeran what are you doing here?

Was half thinking of getting back into watching GoT but I just saw that ed sheeran sings in the new episode so nah buddy, thanks.

The only bad part about first ep of season 7 Game of Thrones was Ed Sheeran ?

Why did they put Ed Sheeran in GoT… it feels less authentic and cheap ?

Why is ed sheeran in GOT? can I not enjoy anything in life

Ed Sheeran was so unnecessary. Don’t do it again #GameOfThrones This is not Gossip Girl guys ☕️? #GoTS7

Friends, please tell me more about how seeing Ed Sheeran in your dragon show is unrealistic.