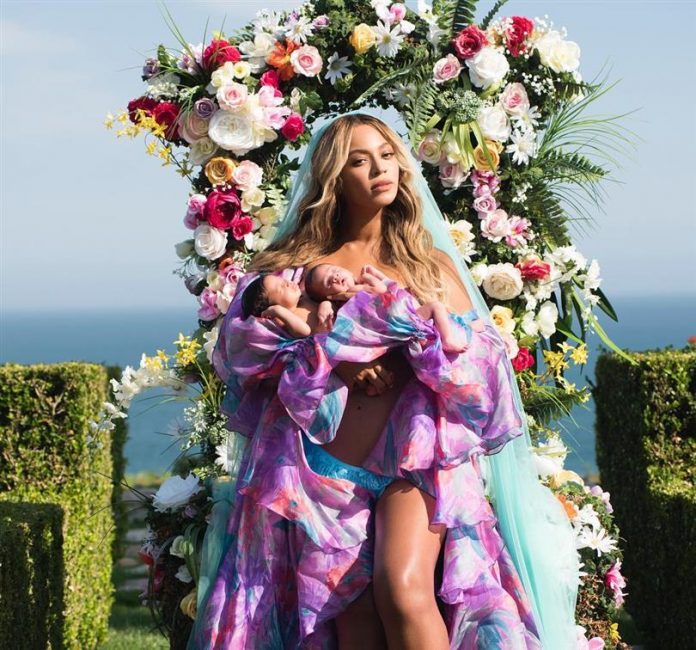 Hold up. Calm down. Ok babies, now let’s get in formation! Beyoncé has expanded her squad, and is showing off her new members – Sir and Rumi Carter. At just a month old, the celebrity royalty are making headlines for the first public appearance, courtesy Beyoncé’s Instagram. The gorgeous twins are adorable as ever in Beyoncé’s latest Instagram post that has the social media world buzzing.

The Queen herself shared the image of her among flowers, similar to her maternity shoot. She is holding both her tiny twins in her arms. They were born through a planned C-section, since Bey has had difficulty in the past bearing children. They are the new tiny tots to the Carter household, the first being big sister, Blue Ivy Carter.

It has truly been a roller coaster ride for the family. Last year, Beyoncé came out with her path-breaking album, Lemonade that dropped major hints of infidelity in the Carter household. The speculation has been on ever since the infamous incident in an elevator at the Met Gala when Solange Knowles assaulted Jay-Z. Then the rapper dropped his own album, 4:44 that openly addresses his infidelity and the trauma he put Beyoncé through. Between these two hit albums, they’ve had a pair of twins that have brightened their lives, and the lives of the BeyHive no less.

Sir and Rumi Carter are two very lucky babies. They’ve been born into a life of privilege and solid talent. Already big sister Blue Ivy raps in her father’s album 4:44. The little twins may just be a month old now, having been born on June 13, but they’re already being welcomed in a positive way by the world. We don’t know yet if they will be making any more appearances, at least for a while. Meanwhile, Bey and Jay were spotted at trendy restaurant, Nobu. This is the first time she is making an appearance since the birth of Sir and Rumi.