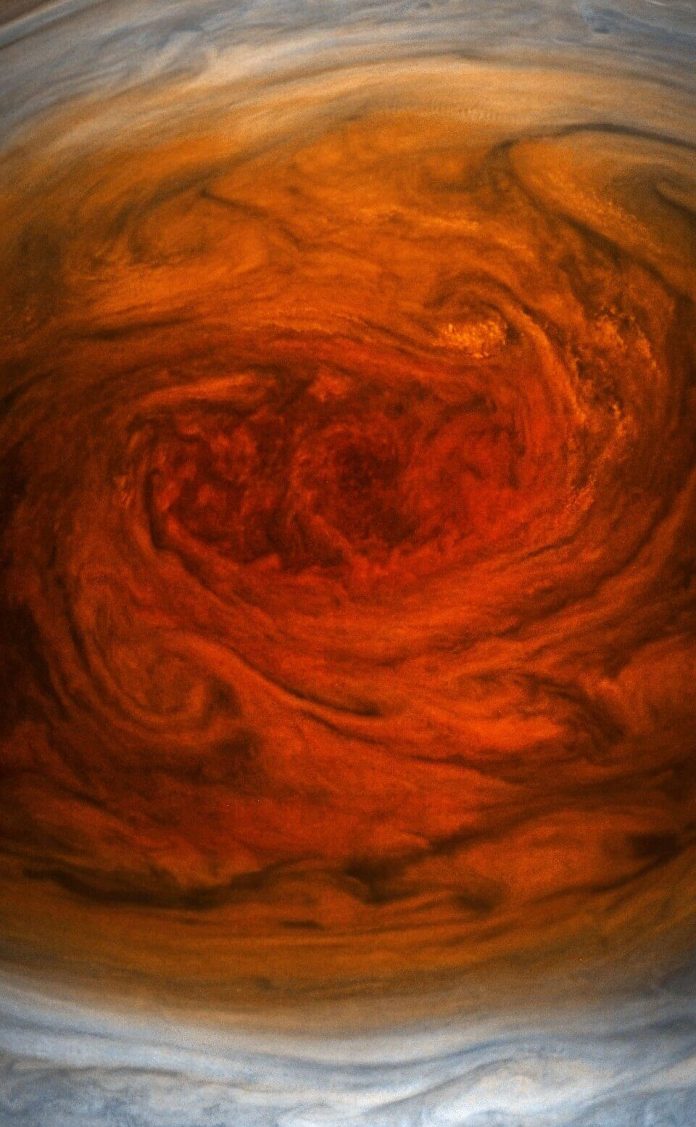 NASA has just released never-seen-before images of Jupiter and it’s Great Red Spot storm. Taken from just 9000 km away (5000 miles), Juno Spacecraft offers a new look at the planet’s famous Great Red Spot storm. The storm, scientists speculate is 1.3 times the size of Earth and has been raging for more than 350 years! Moreover, it’s 10,000-mile-wide clouds move at a mileage, 10 times that of the speed of clouds in Earth’s largest hurricanes.

One of the biggest objectives of the research surrounding Jupiter by NASA’s Juno Spacecraft is to understand the depths of the Great Red Storm, Jupiter’s impact on our Solar System, it’s origin and evolution. As one of the biggest planets of our Solar System, Jupiter has the potential to affect orbits of other planets and asteroids. Scientists also hope to learn more about the planet’s chemical composition and magnetic field as NASA says that Jupiter has a similar composition to the sun and that the two were formed around the same time.

“This monumental storm has raged on the solar system’s biggest planet for centuries. Now, Juno and her cloud-penetrating science instruments will dive in to see how deep the roots of this storm go, and help us understand how this giant storm works and what makes it so special,” Scott Bolton, principal investigator of Juno.

Scientist Scott Bolton heads a team of 32 co-investigators and 28 key personnel dedicated to the mission Juno – which is till date the farthest space mission from Earth. The Juno Spacecraft was launched from Florida back in 2011 and it took the craft 5 years to reach Jupiter. The spacecraft is expected to intentionally crash into Jupiter in February 2018, once it has completed it’s mission of orbiting and collecting data from the planet over a course of 20 months. Bolton’s team is now looking forward to Juno’s next closeup flyby of Jupiter, slated for September 1, 2017.

Juno arrived in Jupiter’s orbit on July 4, 2016 and has made several new discoveries about the planet’s composition, cloud structure, its auroras and magnetic fields. Because the spacecraft is in a highly elliptical orbit around Jupiter,closeup flybys are possible only once in every 53 days.